Headquartered in Australia, Blina Minerals NL (ASX: BDI) is a resource exploration firm having interests in Burkina Faso, which is one of the premier mineral provinces across the world. The company also has a sizeable tenement position in West Africaâs Birimian Gold Province through which it is advancing the development of exploration projects on gold and many other commodities.

Blina has recently released its Annual Report for the 12 months ended 30th June 2019, highlighting its key operating activities during the period. The company observed the following significant developments during the period:

Blina reported encouraging drilling campaign results at the Maintirano Copper Project during the year, which demonstrated high quality copper mineralisation in majority of the 113 rock chip samples accumulated by the company, with values outpacing 11% copper in certain samples. Two field campaigns were organised by Blina during the period, which located and sampled various widespread copper occurrences.

Several samples returned more than 1% copper in the campaigns, which are displayed in the below figure: 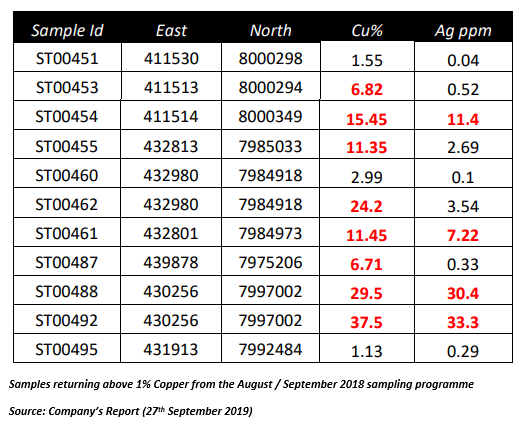 Blinaâs Maintirano Copper Project covers a strategic landholding of about 1,757 sq. km in western Madagascar, which encompasses largely spread copper occurrences present in Cretaceous volcanic rocks. The observed copper mineralisation is thought to have formed during rifting associated with the break-up of the Gondwanaland supercontinent in the upper Cretaceous.

The copper occurrences bear similar structural setting and type of mineralisation as the Michiganâs Keweenaw Copper Province, where 11 bn pounds of refined copper from ores rating between 1.5% and 3.0% copper was produced over a period of one century.

Blina is re-assessing its position in Madagascar. The company is planning to undertake detailed ground geophysical surveys over the sulphide bearing veins and the huge vesicular copper targets which might overlie strata bound deposits.

In January this year, the company notified about its investment in New Zealand-focused gold explorer, Condamine Resources Limited.

The company subscribed for 2.08 million shares in Condamine via a share placement at a price of 12 cents per share, along with a 1.25 for 1 free attaching Option exercisable at $0.25 with a 3-year term. Blina invested $250,000, which represents a shareholding of about 11% in Condamine.

Condamine has four key gold projects, including Big River, Reefton South, Alexander River and Lyell, which are held within its 100% owned subsidiary, Reefton Resources Limited (NZ) and are strategically located within the 2.5Moz Reefton goldfield in the centre of the West Coast of the South Island.

Blina considers Condamine investment as a suitable strategic opportunity for the company. The companyâs Non-executive Director, Mr David Porter, cited that Condamineâs strategy to create a portfolio of high-quality gold assets via exploration and acquisition and to realise value from projects by considering all potential transactions at an appropriate time, along with its strong technical team, were consistent with Blinaâs growth objectives.

Blina mentioned in the Annual Report that Condamine has received draft Access Arrangements from the Department of Conservation to conduct exploration drilling at Alexander River and Big River projects in Reefton, New Zealand. The company expects the drilling to begin in the next few months.

Blina was advised on 18 December 2018 that the Diakouli Exploration Licences and Diakouli had been renewed as two separate tenements for an initial period of three years of a nine-year term.

Blina recorded a cash balance of $300,683 as at the end of the financial year.

One can infer that Blina has observed many significant developments during the financial year, delivering a remarkable performance.