Gold explorer, Ardiden Limited (ASX:ADV), which boasts high-grade Pickle Lake Gold Project in Ontario, has planned to kick-start Phase 1 of its Kasagiminnis Gold Deposit exploration drill program in July this year. Under the first phase, the Company aims to build on the current JORC estimate at the deposit by delineating further gold mineralisation along strike and at depth.

Kasagiminnis is one of the multiple deposit-scale targets and advanced gold prospects within the Company’s total landholding of 664 sq.km at Pickle Lake, covering 120km of under-explored strike.

Kasagiminnis Deposit is distinct from other gold projects in the area, as it has a high-grade Inferred JORC (2012) resource estimate of 790,000 tonnes @ 4.3g/t for 110,000 oz Au. Besides, the deposit is a new discovery with no exploitation of the in-situ gold resource or historical mining.

In addition to Kasagiminnis Gold Deposit, the Company has lately identified ‘Dorothy’ and ‘Dobie’ Gold Deposits with historical estimates at Pickle Lake.

Moreover, the planned drilling would target untested areas along strike and adjacent to south of the main Kasagiminnis Resource containing high-grade gold values, including a historical high-quality intercept of 4.24m @ 21.0g/t Au from 92.14m in drill hole KAS-87-06. 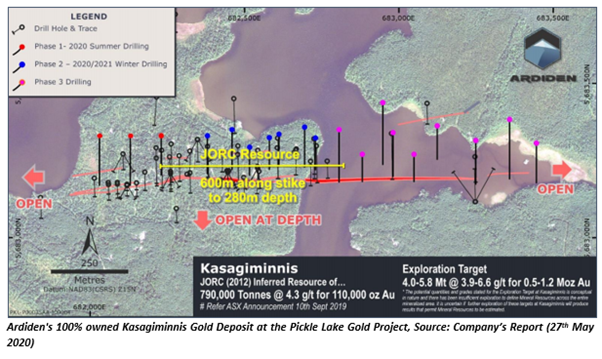 Besides, neither Company’s 2018 drilling campaign nor historical drilling has tested mineralisation below 305 vertical metres at the deposit in spite of mining undertaken at adjacent underground gold deposits to depths above 1km below surface.

Based on geophysical, historical data and structural reviews, the Company observes the potential over minimum 5km strike length of its ground at Kasagiminnis. Supporting this stance, the Company mentioned that Goldcorp’s Dona Lake underground mine developed at an average grade of 6.6g/t Au to 455m below surface is located to the east along strike while Barrick’s undeveloped Koval Deposit is situated to the west along strike.

The Exploration Target delineated by the Company is based on existing and historical data available at the Kasagiminnis area and along strike of the similar structure as the Maiden Inferred Mineral Resource Estimate.

Following the Phase 1 drill programme at Kasagiminnis, Ardiden has planned additional drill programmes in 2020 and 2021 at the deposit to progress with Phase 2 and 3 of Resource Definition over the Exploration Target area. Moreover, the Company continues to formulate a comprehensive understanding of structural and geological settings for gold mineralisation across its flagship project with ‘structure’ evolving as a vital control on gold mineralisation.