The healthcare sector became more prominent after the COVID-19 pandemic as investors focused on it.

Given this year's highly volatile condition in the broader market, investors are looking for stocks to tackle the current situation. The market sharply declined in 2022, especially in the two quarters, before reversing course over a summer rally.

However, the rally also didn't last long, as concerns over higher interest rates could tip the economy into a recession. The hawkish remarks of the Fed officials, backing further rate hikes to tame inflation, had weighed on the market sentiment.

Now, the investors are betting on another 75-basis point hike or at least a half-point increase in the upcoming meeting of the Federal Reserve. The investors grew concerned over the macroeconomic headwinds and are looking for safer investments amid the uncertainties.

Notably, the FDA had given authorization for Covid booster shots on August 31, targeting the omicron BA.5 subvariant of the virus. The US could prepare for another increase in infections in the coming months.

Let's look at some of the biotech stocks and their recent performance.

Cardinal Health is a popular healthcare firm that aims to provide patient care while reducing costs. The US$ 19.03 billion market cap firm had a dividend yield of 2.79 per cent. The P/E ratio of Cardinal Health was 10.49.

The VRTX stock added more than 33 per cent YTD while soaring over 55 per cent YoY. In the ongoing quarter, it had gained more than three per cent. It closed at US$ 292.11 on September 9, up by 1.08 per cent from its previous close. 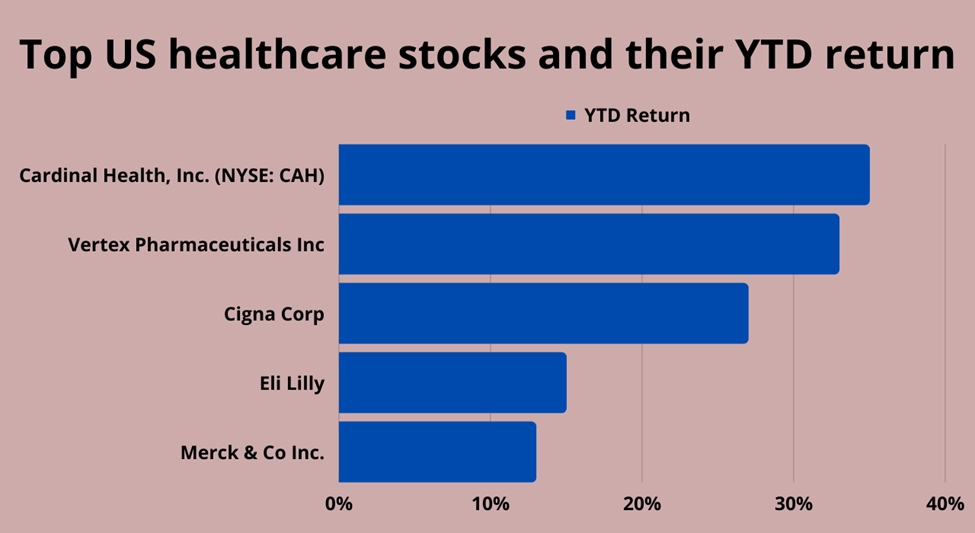 Cigna Corporation is a leading healthcare and insurance firm with a dividend yield of 1.54 per cent. Its P/E ratio was 17.46, while its market cap stood at US$ 92.91 billion after closing at US$ 292.84 on September 9.

The healthcare and insurance company expects its adjusted revenue to be at least US$ 178 billion for fiscal 2022.

Eli Lilly is one of the leading pharmaceutical firms with a market cap of US$ 301.86 billion. The company had a P/E ratio of 50.67, while its dividend yield stood at 1.26 per cent through September 9.

The revenue of Eli Lilly and Company decreased by four per cent YoY to US$ 6.48 billion in Q2 FY22. Its reported net income totalled US$ 952.5 million in the latest quarter of this year, noting a decrease of 31 per cent from US$ 1.39 billion in the second quarter of the prior year.

The Indianapolis, Indiana-based company expects it is fiscal 2022 revenue to be between US$ 28.8 billion and US$ 29.3 billion.

The MRK stock soared nearly 14 per cent YTD while gaining over 18 per cent YoY. However, its price dropped by over four per cent QTD after closing at US$ 87.34 on September 9.

The firm's stock had an RSI of about 43, suggesting that the stock could be highly volatile at the moment.

Several healthcare stocks have provided higher returns to investors while generating strong revenue during the pandemic. Healthcare was one of the best-performing sectors, but it even declined due to an overall volatile market.

The S&P 500 healthcare sector lost nearly three per cent YoY while decreasing about seven per cent in the running year. In the ongoing quarter, the healthcare segment of the S&P 500 index gained 1.63 per cent.