The US climate and tax bill became law after US President Joe Biden signed the bill on Tuesday, August 16.

Amid these developments, we explore five carbon capturing stocks curated by Kalkine Media® and see their recent performances:

Equinor ASA is a multinational company and has business operations in more than 30 countries. The company invests in renewable energy projects and also deals in offshore wind, solar, oil refineries, and natural gas processing.

Equinor paid a quarterly dividend of US$ 0.4. Shares of Equinor ASA increased by over 38 per cent year-to-date (YTD). Over the past month, EQNR stock surged 9.5 per cent.

According to Refinitiv data, EQNR stock had an RSI value of 54.94 as of August 16, 2022, indicating a moderate trend for the stock.

Schlumberger Limited is an oilfield services company with operations in over 140 countries. The company has expertise in reservoir performance, well construction, and production enhancement. It also offers digital solutions.

Recently, Schlumberger has started looking at ways beyond traditional carbon services. It has endeavoured to directly partner with industrial companies in assessing, developing, and operating entire carbon-capturing value chains.

Schlumberger has a market cap of US$ 50.6 billion, and its shares increased by over 12 per cent this year. On a yearly basis, SLB stock jumped 28.72 per cent.

In the second quarter of 2022, Schlumberger posted a revenue of US$ 6.8 billion, which is a 20 per cent increase year-over-year.

The US$ 60.7 billion company Occidental Petroleum distributes a dividend of US$ 0.13 on a quarterly basis.

The earnings-per-share (EPS) of Occidental Petroleum is US$ 10.14. the Houston-based oil & natural gas company has a price-to-earnings (P/E) ratio of 6.45.

In the past six months, OXY jumped over 62 per cent. Its shares gained close to 160 per cent year-over-year. During the second quarter, Occidental Petroleum bought back 18 million shares.

Total net sales for Q2 2022 for Occidental Petroleum were US$ 10,735 million compared to US$ 6,010 million in the same quarter in the previous year. 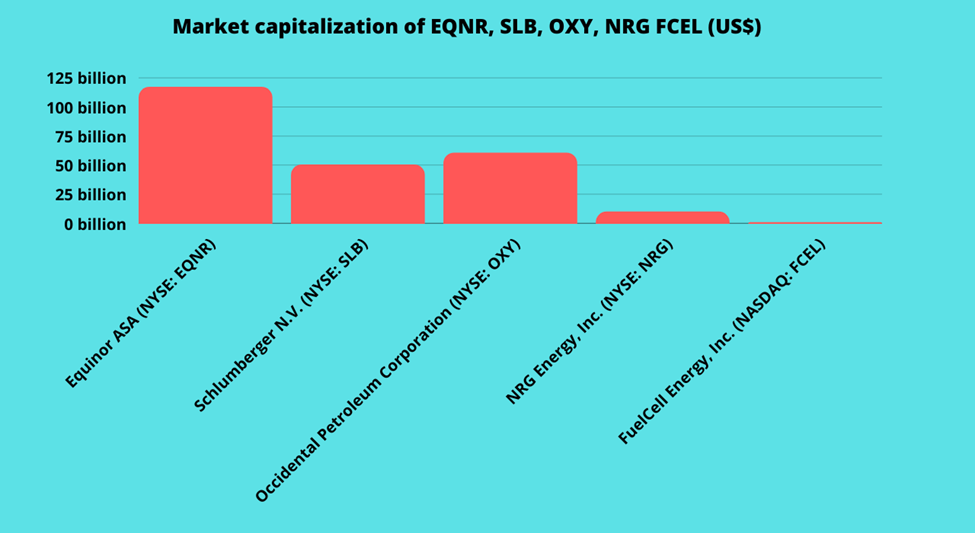 Among the largest power producers in the US, NRG Energy has a market cap of US$ 10.2 billion. It has a customer base of seven million people.

The US$ 1.2 billion market cap company FuelCell Energy announced a new carbon savings calculator on August 4, 2022. It is built for companies that want to delve deep into how to recycle carbon emissions and use them in their business.

FCEL stock plummeted by over 14 per cent on a yearly basis. However, over the past month, FCEL gained over 47 per cent.

As we have seen the stock performances of the above carbon capturing companies, investors can choose from a bevy of other options after doing their due diligence. Investing during volatile stock market conditions can be tricky for traders. One should count all the chips and scales before picking stocks to invest.