TuSimple Holdings Inc. (NASDAQ: TSP) stock plunged over 10% on Wednesday after it announced the successful test drive of its fully autonomous semi-truck on public roads.

The California-based company said that it has successfully completed the test-run of its fully autonomous semi-truck on public roads without any human intervention last week, making it the world's first automated semi-truck to achieve the feat.

The test run took place in Tucson, Arizona, on Dec 22. The vehicle traveled more than 80 miles on surface streets and highways before arriving at the Phoenix metro area.

Its Autonomous Driving System (ADS) has successfully navigated the surface streets, traffic signals, on- and off-ramps, lane changes in highways, and other traffic activities in the open traffic, the company said. It added that the vehicle interacted naturally with other motorists. 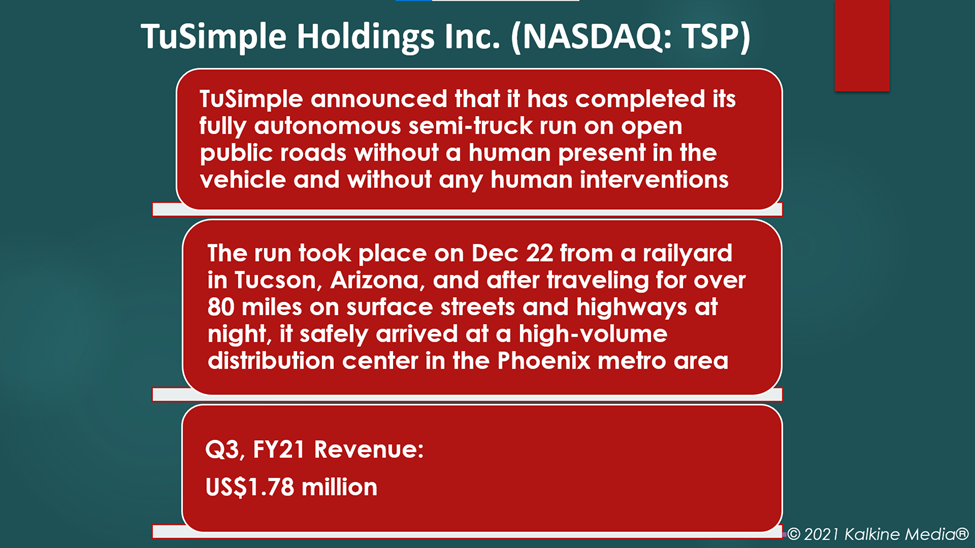 Only a few US states have enacted laws for driving autonomous vehicles. Concerns over the vehicles’ safety have been a major obstacle towards getting a country-wide mandate. Meanwhile, TuSimple’s test run of its autonomous vehicle will continue in the new year.