Stocks of Ericsson (NASDAQ: ERIC) and The Travelers Companies, Inc. (NYSE: TRV) were trending on Wall Street Tuesday after reporting their quarterly earnings. The former declined around 3%, while the latter was up more than 2% in morning trading.

Let's look at the quarterly earnings of the companies.

Ericsson is a telecommunications company and a leading provider of 5G network equipment in the US. It is based in Stockholm, Sweden.

It reported strong third-quarter core earnings that topped analysts' expectations. The earnings were driven by robust demand for 5G equipment globally, despite losses in the Chinese market.

The net sales were SEK56.3 billion (Swedish Krona) in Q3, FY21, compared to SEK57.5 billion in the same quarter of the previous year.

Its EBIT was SEK8.8 billion compared to SEK8.6 billion in the year-ago quarter. Analysts expected its EBIT to be around SEK7.85 billion, the Refinitiv data showed.

Ericsson plans to cut its China operations after a huge sales decline in one of its biggest markets, the company said on Tuesday. The decline was caused by Sweden's ban on China's Huawei from selling 5G gear. 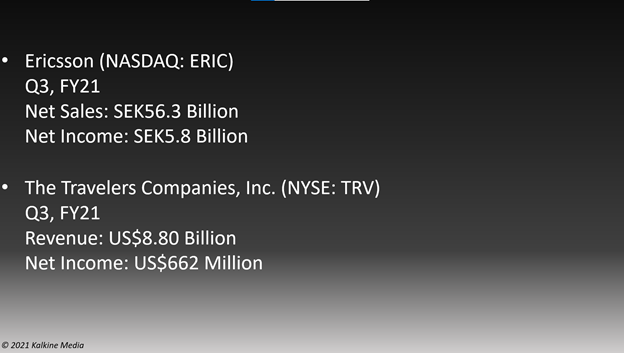 Also Read: Seven AAA-rated ESG firms: A look at how these stocks faring

Also Read: From Netflix, Tesla to Intel - top stocks to watch this week

The ERIC and TRV stocks witnessed significant growth in recent days. For instance, the stock value of ERIC ticked up 1.41% YTD, while the TRV stock grew 12.7% YTD. However, investors should closely evaluate the recent developments in the market and the stocks before investing.