Despite volatility, some stocks continued their ascent. Here are the top stocks to watch out for this week after their significant climb in the stock market.

These five stocks have set their 52-week highest price on Monday. Here we explore them.

The stock broke the 52-week highest price probably due to its new truck launch on Sep 24. It unveiled its new truck NASCAR Camping World Truck Series for 2022.

McDonald’s corp., famous for its delectable burgers, is one of the largest restaurant owner-operators in the world. The Chicago, Illinois-based company has a presence in over 119 countries. Its market cap is US$185 billion, the P/E is 26.99, and the dividend yield is 2.09%.

Interestingly, the company has been paying dividends and have been raising them for the last 45 years. Its revenue was US$5.89 billion, and net income was US$2.22 billion for the June quarter of 2021. The stock gave a 12% return in one year. 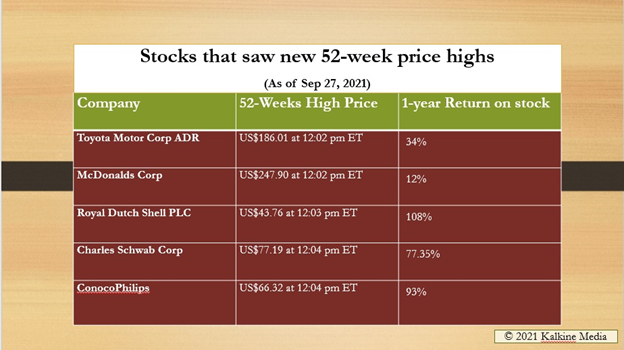 RDS is an integrated oil and gas company engaged in exploring, producing, and refining oil and gas. The company’s headquarters is situated in The Hague, Netherlands.

Also Read: With chipmakers in the spotlight, here’s a peek at five of them

The company has interests in banking, brokerage, and asset management. It is based in San Francisco, California. Its revenue and net income for the June quarter of 2021 were US$4.52 billion and US$1.27 billion, respectively. SCHW’s market cap is US$145.7 billion, the P/E ratio is 32.57, and the current dividend yield is 0.95%. The stock gave a 108% return in one year.

The stock broke its 52-week highest price record and traded at US$66.32, with a 2% increase from the previous close at 12:04 pm ET on Monday. The independent oil exploration and production company is based in Houston, Texas. For the three months ended June 30, 2021, its total revenue was US$10.21 billion, and net income was US$2.09 billion.

It will declare Q3 results on Nov 2, 2021. The company made some important announcement on Sep 20. It has increased ordinary dividends by around 7% to US46 cents per share. It also announced the improvement on its Scope 1 and 2 CHG emissions intensity reduction targets.

The stock gave a 93% return in one year.

Also Read: Which companies are helping to remove carbon from the air?

The stock markets have been volatile this month owing to various developments both globally and domestically. US markets will closely watch their counterparts in Asia and Europe in the wake of the Evergrande crisis and new geopolitical developments. However, investors should carefully evaluate the stocks before investing.