The Sports Direct International PLC (SPD) retail chain was formed in the year 1982; headquartered in London, the United Kingdom, is a well-known supplier of retails sports, footwear, leisure clothing, apparel and equipment products through a network of retail stores and online channels. It engages in five segments: European Retail, Wholesale & Licensing, UK Sports Retail, Rest of World Retail, and Premium Lifestyle. The company’s business operations are spread across 20 countries and a total headcount of around 26,500 staff.

The Group continues to maintain strategic relationships with its key third party brand partners, such as Adidas, Nike, Under Armour and Puma. The elevated retail space within the new generation stores, along with enhanced social and digital platforms, opens the door for brands to use their expertise to connect with our consumers.

The directors of Goals Soccer Centres were given a red flag by Sports Direct. Sports Direct has threatened to vote against the reappointment of all directors at Goals Soccer Centres, the ailing football pitch operator. Goals Soccer discovered that it owned over £12m in unpaid taxes which further pushed the company into an internal crisis which led to a suspension of the company’s shares. The company’s CEO Mr Andy Anson announced his separation from the company and will be joining the British Olympic Association. Sports Direct has appointed consultancy firm Deloitte to conduct an internal investigation.

Sports Direct International plc has announced that the Offer Document contains the full terms and condition of its final mandatory cash offer to acquire the entire issued and to be issued share capital of GAME Digital plc. This will exclude any positions created by Sports Direct or its persons. The Offer is of 30 pence per share in cash for GAME is final and the Offer Price will not be increased. 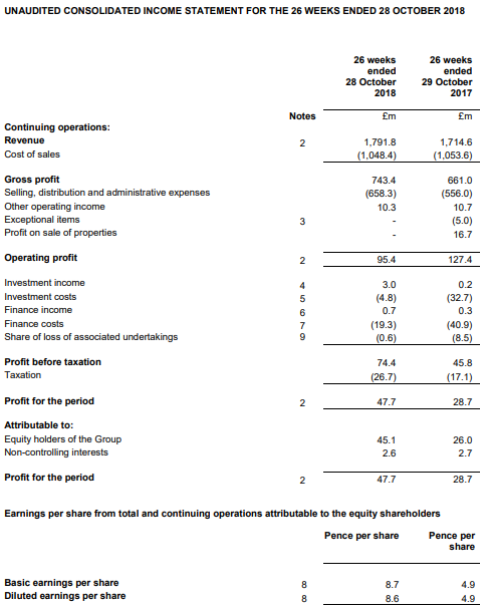 In the first half of financial Year ending 2019, Sports Direct Plc’s revenue was £1,791.8 million in the first half of the financial year 2019 ending October 2018 against £1,714.6 million in H1 FY 2018. There was an increase of 4.5 per cent due to an increase in sales from Premium lifestyle segment and Rest of world retail segment whereas other segments like UK sports retail, European Sports Retails had declined mainly because of store closures.

The Group is profitable, highly cash strong and has considerable financial resources. The Group currently operates comfortably within its banking facilities and covenants, which run until November 2021 and November 2022. The Directors believed that the Group is well positioned to tackle and mitigate risks associated with business activities successfully, despite the uncertainties in the economy. The Group’s forecasts and projections, taking account of reasonable possible changes in trading performance, show that the Group should be able to operate within the level of the current facility. Additionally, the Directors have also considered the Group’s reliance upon its key stakeholders, including customers and suppliers and found no over reliance on any stakeholder. The Directors have a positive outlook regarding the operational excellence and the intent for the Group is to continue delivering good results in the foreseeable future. On this basis, the Directors continue to back the going concern approach for keeping track of the company’s performance.

There is a disruption or other adverse events affecting the Group’s relationship with any of its key brands or brand suppliers which could have an adverse effect on the Group’s business. The possibility of a deterioration of the economy both in the UK and worldwide and a reduction in consumer confidence and retail spending, which could impact on the performance of the business. The Group operates internationally. Many foreign contracts relating to the sourcing and sales of Group branded goods are denominated in US Dollars and the Euro, thus leaving exposure to foreign exchange risk. The sports retail industry is highly competitive, and the Group currently competes at international, national and local levels with a wide variety of retailers of varying sizes who may have competitive advantages. New entrants are expected to raise the bar further.

Daily Chart as at June-20-19, before the market close (Source: Thomson Reuters)

At the time of writing (as on June 20, 2019, at 04:37 PM GMT), shares of Sports Direct International PLC were quoting at GBX 285.6 per share; up by 1.92 per cent against the yesterday's closing price level. The company had an outstanding market capitalisation of £1.49 billion.

The shares of the company (at the time of writing) were trading below the 60-days and 200-days SMA, which shows a negative trend in the stock price movement and could further move down from the current trading levels.

In the past 1 year, shares of Sports Direct International PLC have delivered a negative price return of 30.19 per cent. However, on a year-to-date basis, the stock was up by approximately 17.83 per cent and declined by 4.21 per cent in the past three months.