A majority of retailers in the UK plan to increase prices on products by the end of the year. According to the British Retail Consortium, about 10% of the UK retailers have already increased prices, and 60% of retailers plan to increase prices by the year-end due to rising supply chain costs. Retail businesses are currently witnessing rising costs related to energy and wages, among others.

Fresh concerns are arising due to delays in Christmas deliveries as the country’s busiest port - Suffolk port  - would begin to refuse empty return containers. The huge cargo build-up has resulted in the shipping giant Maersk to divert vessels away from the port. The shortage of HGV drivers has resulted in severe congestion at the port and is expected to impact deliveries for the upcoming holiday season if the vacancies are not filled in time. Let us explore the investment prospect in 3 retail stocks - Marks and Spencer, Next and Frasers Group. 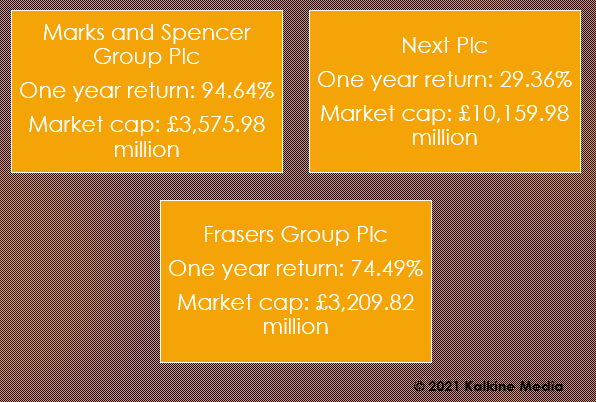 Marks and Spencer Group is an international retailer that specialises in the sales of clothes, food and homeware. Yesterday, on 14 October, the British retailer unveiled its new large-scale store at Leamington Spa in Warwick. The company had previously announced the closure of its Broadmead store in Bristol in January 2022.

Marks and Spencer’s clothing and home revenue rose by 92.2% year-on-year for the 19 weeks to 14 August 2021. However, the company expects adjusted profit before tax for the full year to be about £350 million.

In the last one year, the shares of Marks and Spencer gave a return of 94.64% to shareholders.

Next is UK-based multinational footwear, clothing, and home products retailer. Last month, the US-based clothing retailer Gap entered a partnership with Next for expansion of its business in Ireland and the UK.

In the last one year, the shares of Next gave a return of 29.36% to shareholders.

Frasers Group is UK-based retail and intellectual property company. It trades through the Sports Direct brand through online and physical channels. The company has been focusing on investing in an omnichannel retail strategy.

In the last one year, the shares of Frasers Group gave a return of 74.49% to shareholders.