The mayor of London, Sadiq Khan, has requested the government for providing a £5.7 billion bailout package to Transport for London (TfL), London's transport operator. The bailout money is likely to assist in keeping the British capital's transport system running for coming one and a half years. Khan, who serves as the chairman of TfL, had earlier requested for this financial package. He presented an argument that the transport regulator’s income from sale of passenger tickets plunged around 90 per cent as a result of the coronavirus-induced lockdown. In addition, the submission read that the passing numbers would not return anywhere to normal levels till social distancing measures would remain applicable.

It is to be recalled that in May 2020, TfL had secured its first bailout worth £1.6 billion. In July 2020, TfL has stated that it would require a funding of £2 billion for the second half of the year. This funding amount was up to £300 million higher than its outlined amount in a previous emergency budget. TfL at that time also cited the reason of low passenger numbers on account of the pandemic.

The number of passengers using public transport for commuting has declined significantly during the coronavirus pandemic, leading to a fall in revenue from fares for the operator. The downward slide in passenger numbers has been mainly due to the strict guidelines put in place by the British government for operating and commuting on public transport in order to curb the spread of Covid-19 infections.

It is to be noted that TfL is dependent to a large extent on the income it generates from passenger fares by operating tubes, buses and trains, besides investments made in new projects. Passenger numbers have remained low mainly on account of strict guidelines provided by the government for operating buses and trains to check the spread of Covid-19 infections among the commuters. In the wake of the coronavirus pandemic, passengers have not been using public transport for commuting as many people and companies have adopted work from home. People have been traveling less by buses and trains because of the fear of catching Covid-19 infections in closed environments.

In another request, the mayor of London called for an urgent new financial support package for some of the hardest hit sectors due to the coronavirus-led crisis. These sectors included retail, hospitality, leisure and cultural. 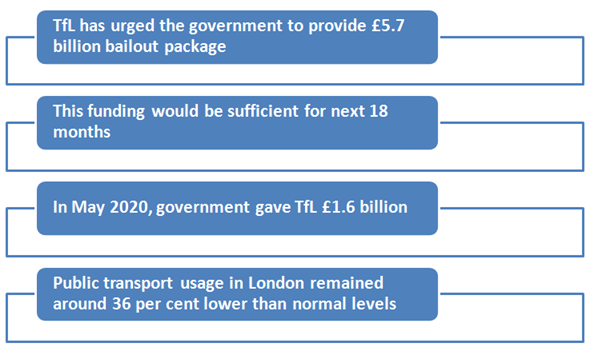 As per recent estimates, public transport usage in the UK’s capital city of London remained around 36 per cent lower than normal times. The road traffic was slowly reaching its usual levels. Driving in London rebounded but still remained below seven per cent. Experts believed that it could take almost a year for the capital to recover from the coronavirus-led crisis. London’s contribution to Britain’s gross domestic product (GDP) is around 23 per cent. Regardless of the government’s bailout package in May 2020, Khan decided to raise the congestion charge by £4.50 to £15 per day. TfL’s revenue from its tube and bus fares was down almost 90 per cent during peak lockdown period.

Khan believed that empty city offices or with low attendance and work from home was killing London’s economy as a whole in addition to pressurising finances at TfL. Though some experts observed that while London’s economy has started rebounding, it was significantly hurt by a massive decline in commuters, including business travel and tourism related travel in the city. Travel in the capital city has been extremely low as compared to pre-pandemic times.

The TfL is an integrated transport authority. It is responsible for meeting Mayor Sadiq Khan's strategy and promises on transport in London. The authority runs the day-to-day activities of the Britain’s capital city’s public transport network, besides managing London's main roads.

To sum up, the request for another bailout package by TfL indicated the severity of the crisis that the coronavirus pandemic has brought to London’s public transport system. The government’s strict guidelines of social distancing to curb the spread of Covid-19 infections for commuting seems to be successful as Londoners reduced their commute on public transport. Many experts agreed that in order to sustain the functioning of essential services like public transport, the government must look at targeted financial support measures. On the other hand, some experts suggested that these service providers should look at increased use of technology and other schemes to increase consumer confidence. Given the uncertain situation and economic crisis that has gripped the country, public transport could look at strategies for being self-sustainable in long-term.