Pharmaceutical majors GlaxoSmithKline (LON: GSK) and Sanofi SA (EN Paris: SAN) have reported favourable results in the coronavirus vaccine trials after an earlier setback.  It was reported that the Sanofi and GSK Covid-19 vaccine shot was able to trigger sharp neutralising antibody responses around all adult age groups in its phase II trial. This has boosted optimism that the jab would help fight the pandemic this year only.

In fact, a high immune response was observed after a single dose in patients who have had prior infection. This showed the possibility of a strong booster potential.

The candidate’s global phase III study is likely to begin in the coming weeks. In case the last phase of the trials is successful, the Sanofi/GSK vaccine candidate could get approval by the end of this year.

The GSK share was seen at GBX 1,369.40 in the early morning trade today at the LSE, down 0.74 per cent from its previous close.

On the other hand, the SAN share price was trading marginally up by 0.13 per cent at a value of EUR 87.77 during the morning hours at the EN Paris exchange. 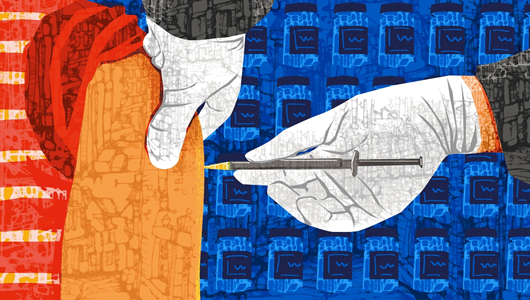 Also Read: Is GlaxoSmithKline PLC getting ready to take off?

While Sanofi had provided the recombinant antigen, GSK has contributed the pandemic adjuvant to the Covid-19 vaccine candidate.

The study was conducted on 722 volunteers in the age group of 18 to 95. The volunteers were a mix of healthy adults and people with high-risk medical conditions to ascertain the safety and reactogenicity of the two shots that were administered 3 weeks apart. The study started in February this year with volunteers enrolled across the US and Honduras.

The study results revealed almost full seroconversion after the second shot, with acceptable tolerance and nil safety concerns across all age groups. After receiving two shots, the volunteers showed neutralising antibodies  very similar to those found in people who had recently recuperated from the illness.

The Sanofi/GSK vaccine plan suffered an initial setback when the medical researchers had to re-formulate the vaccine candidate after early testing produced insufficient immune response among older people.

Thomas Triomphe, Executive VP and Head, Sanofi Pasteur, said that the results confirmed the potential of the vaccine in addressing the ongoing health crisis. He added that as coronavirus variants continue to come about, multiple vaccines are needed to combat the virus.

Healthcare experts totally agree with that view and say that more candidates are required as governments around the world race to vaccinate their populations and combat the outbreak that has killed millions of people till date. In fact, there are around a dozen vaccine candidates that are undergoing late-stage clinical trials around the world as of now.

The phase III study will be a randomised and double-blind study with a 10µg dose of the jab. It is expected to enrol over 35,000 adult participants from a broad range of nations.

Also Read: COVID-19: WHO warns against ‘pandemic is over’ mindset, flags vaccine shortage