In today’s budget, the UK chancellor Rishi Sunak came up with major announcements for alcohol that has cheered the pubs and bars stocks, with Wetherspoons and Mitchells & Butlers featuring among the highest gainers on the FTSE 250 index.

The surge was due to the announcement of “draught relief” - a lower duty on cider and draught beer.  The budget further simplified alcohol duty with the introduction of a system devised around the principle of “the stronger the drink, the higher the duty rate”.

The new announcements include cutting the main duty rates from 15% to 6%. The budget also included provisions of ending duty premium of 28% on sparkling wines, 5% duty cut on cider and draught beer, and cancelling the proposed rate rise for spirits.

Here is a review of three pub/bar stocks - Marston’s, J D Wetherspoon and Mitchells & Butlers in the backdrop of budget announcements that would help them overcome the pandemic shock. 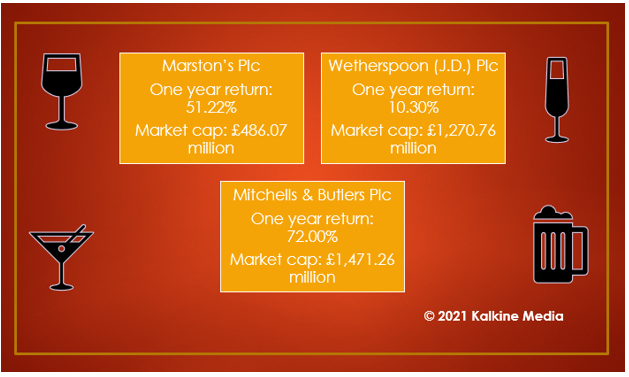 J D Wetherspoon is a pub company that operates in Ireland and the United Kingdom. It operates 925 pubs as of June 2021 under Lloyds No.1 bars and 50 Wetherspoon hotels. The company announced that it will slash prices on several of its drinks to 99 pence next month.

Mitchells & Butlers is engaged in operating and managing pubs, bars and restaurants in the United Kingdom. The company owns Toby Carvery and All Bar One chains.

For the 51 weeks ended 18 September 2021, Mitchells & Butlers’ total sales, including 18 weeks of enforced closure, are 45% of pre-Covid levels. The company benefited from the temporary reduction in the VAT on sales of non-alcoholic drinks and food sales.

Marston’s is an independent pub retailing and brewing company. It operates in the UK through a network of 1,500 pubs.  In February 2021, Marston’s entered into an agreement to acquire SA Brain in Wales.