Thomas Cook the iconic British holiday maker announced that it would be making a request to its bondholders to allow it more time to secure a £1.1 billion rescue package from strategic investor Fosun International Ltd of China amidst fears of imminent collapse under mounting debt burden. The tour operator has a debt of £1.247 billion on its books as of 31 March 2019 with loss from operations of £245 million on a sales of £3.019 billion and a market capitalization of £200 million as on the date, reporting for the half year period.

The deal being dubbed as recapitalization plan by the tour operator will see substantial ownership of the company being passed on. Other than that, the strategic investors Fosun international Ltd of China will also get control of Thomas Cook’s profitable Airline operations. This deal will, however, leave little value for the shareholders of Thomas Cook. The stocks of Thomas Cook have been falling on the London Stock Exchange since the past one year with the stock losing nearly 90 per cent value during the period.

The company is a grand old company, with nearly 200 years in existence. While the company started out as Thomas cook & Son in 1841, it became the world-renowned travel agency through a series of merger and acquisitions deals made along the way over this 200-year period. However, in recent years, the company made some strategic errors in understanding the prevailing market dynamics correctly, accompanied by some corporate misadventures, which landed it in its current state of being. It is to be noted that the closest competitors of the company TUI Travel and Jet2 Holidays have had a decent financial performance during the year. Thomas Cook ranks third largest in terms of revenue in the United Kingdom after these two companies.

However, the developments with the company will have no effect on travellers as their pre-booked holiday packages are well protected under the ATOL scheme and will go ahead as promised. The deal will additionally bring in much-needed relief to employees and vendors of the company, who are worried about their future with the company for some time now.

The company’s business is bifurcated into two divisions, tour operations and airline operations. The company’s airline business though is in good shape and can be called the only bright spot in its folds. This deal will, however, also see the control of the airline business being transferred to Fosun international, which previously was protected by European Union regulations restricting foreign ownership in European registered airline companies. The airline has a fleet size of 46 and operates on 105 leisure destinations worldwide. It operates from 10 bases across England and has an IATA call sign “THOMAS COOK”. The company though serving mostly to Thomas Cook customers has operational efficiencies with that of any large low-cost European airline.

This deal will recapitalize the company, and it will give it a fresh lease of life, which the company hopes will help it tide over its present predicament and restore it to its former glory and become a successful tour operator similar to its closest two competitors. Despite its worsening financial situation, the company remains one of the largest tour operators of the United Kingdom.

TCG - Insights from Financial Results published on 16 May 2019 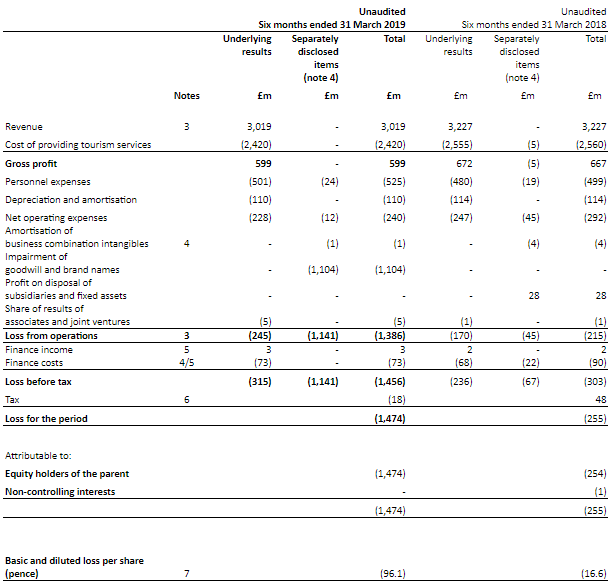 Price Chart as on 16 September 2019, before the market close (Source: Thomson Reuters)

The deal should it go through without resistance from the bondholders, would be able to bring the company out of its debt woes. Its new owners Fosun International could also help it expand its operations deeper into China, a large market with huge possibilities.

The company's digital platforms and app suits provide the latest concepts like customer onboarding, self-service and mobility along with traditional functionality of point of sale across devices. The company attributes its product's success among its clients to five factors 1. Unification of Systems 2 innovate and adapt to multiple markets 3. Create an omnichannel experience 4. Performing through leading-edge technologies and 5. Achieving operational agility.

The company provides its services to clients in 18 countries with offices located in London, Detroit, Los Angles and Auckland.  The company was founded in 1990, and its head office is located in London, its shares were listed on the London Stock Exchange on 26 May 2017, where they trade with the ticker name ALFA.

Price Chart as on 16 September 2019, before the market close (Source: Thomson Reuters)

The company has a very strong client base, a solid recurring revenues base and committed projects under implementation. The company has been able to successfully go online with one of its project for one of the global Original Equipment Manufacturers in Europe and has also carried out substantial work with other two new EMEA customers is in advance stages of negotiations in finalizing product license agreements with them.  All the above (new and old) clients have contributed significantly to the revenue generation of the company in the first half of 2019.

The company though expects its employee cost to go up during the second half of the year, followed by a onetime legal expenditure. During the first half a certain revenue prospect approximately of £4 million, very well in advance stages of realization couldn't be finalized, resulting in non-recognition of the item during the first half, however, the revenue item is expected to be recognized as such in the second half of the financial year.

Given the expected results for the first half of 2019, and given the difficult macro-economic environment extending well beyond 2019, the company expects its full-year profits to be significantly lower than its previous guidance.