The shares of the company have a listing on the main market segment of the London Stock Exchange. There they trade bearing the ticker name BMY. 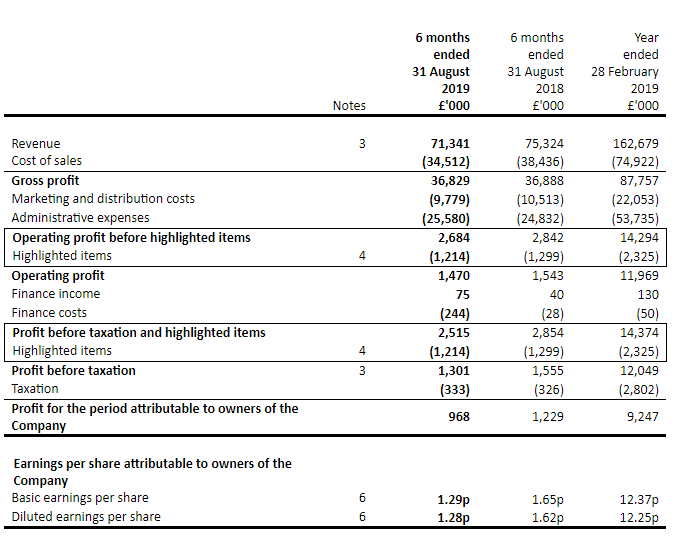 The company expect its results to be significantly second half weighted, as in the past due to the month of October being the peak period for academic title sales followed by Christmas for sales of consumer books.

Highlights for the second half include the launch of four new BDR 2020 products in its Non-Consumer division, building on its strength in history, theology and fashion, including the Bloomsbury Fashion Video Archive offerings in partnership with Yoox Net-a-Porter.

There will be a small charge for this year on some of the companyâs US print titles, printed in China and imported into the US on account of Increased US tariffs, introduced on 1 September 2019 and further changes currently planned from 15 December 2019. The company is closely monitoring the situation and working to ameliorate the impact for this year and thereafter.

Hunting Plc is a United Kingdom domiciled international engineering and related services provider to the leading upstream oil and gas companies of the world. The company is headquartered in London and maintains a corporate office in Houston. Other than having operations in the United Kingdom, the company also has operations in Netherlands, Canada, China, Indonesia, United Arab Emirates, Mexico, Norway, Saudi Arabia, Singapore, and the United States of America.

The company, incorporated in 1874, is a premium listed public limited company traded on the London Stock Exchange. There its shares trade under the ticker name HTG.

The company on 29 October 2019 came out with a trading update regarding the third quarter performance of the company for the financial year 2019.

Despite the challenges the company continues to deliver operating profits, generate cash and exercise strict cost discipline. The working capital of the company is controlled and since year-end ,it continues to report a modest reduction in its inventory levels. The capital spend of the company remains modest and tax losses from prior years continue to shelter the company from any significant outflows of cash in the form of taxes.

Plus500 Limited is a United Kingdom domiciled company providing online trading platform to trade CFDs internationally. The company offers a basket of more than 2,400 different underlying global financial instruments including cryptocurrencies, options, ETFs, foreign exchange trading instruments, equities, indices and commodities. The Platform provides the flexibility to its clients to trade CFDs in fifty countries and in thirty-two languages. The platform is assessable through computer as well as smart phones using multiple operating systems and the company charges no commission on trades from its clients. The company has operating licenses in Israel, New Zealand, South Africa, Singapore, Australia, Cyprus and the United Kingdom.

The company on 29 October 2019 came out with a trading update for the third quarter financial performance for the year 2019.

The underlying operational performance of the company during the third quarter and its new customer acquisition metrics remain robust. These new customers are expected to provide incremental revenues in due course. The company is confident that it can continue to outperform its peer group of companies by retaining the level of highly targeted marketing expenditure to exploit market opportunities as they appear in terms of customer acquisition.