French Connection Group PLC (FCCN) is a United Kingdom based branded fashion clothing and accessories retailing company. The Company has its own retail stores and concessions within the United Kingdom, in continental Europe, in the United States of America and in Canada, it also has an e-commerce portal, through which it does online retailing in each of those territories. The company’s flagship  brand  is “French Connection”, under the umbrella of which the company designs, manufactures and markets its own branded apparal as well as accessories like toiletries, shoes, watches,  fragrances, jewelry, eyewear. The company also retails furniture and homeware using its own distribution channels: retail stores, e-commerce, wholesale and franchise licensing.

The company was founded in 1972 and it has its headquarters in London. The shares of the company were listed for trading on the London Stock Exchange on 9 May 1983, where they trade with the ticker name FCCN. 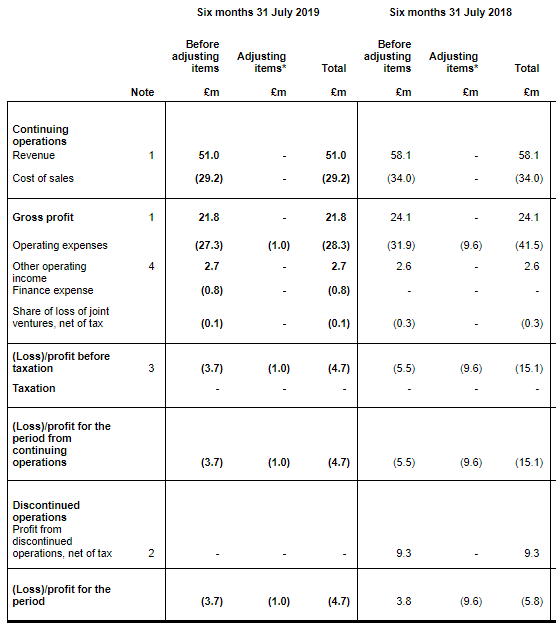 Price Chart as on 17 September 2019, before the market close (Source: Thomson Reuters)

On 17th September 2019, at the time of writing the report (before the market close, GMT 9.05 AM), FCCN shares were trading on the London Stock Exchange at GBX 33.3.

The wholesale business of the company again grew strongly during this six month period ended 31 July 2019 in the United States of America, although there was an impact due to a change in the ordering behavior of certain big customers in the United Kingdom  and in Europe, with some of the sales shifting into the latter half of the year.  Given the prevailing business environment, the Retail division performed well, achieving a 1.4 per cent increase in like-for-like sales.  Underlying operating loss of the company, while leaving out  IFRS 16 and Onerous Lease adjustments has improved by £0.2 million during the six month period ended 31 July 2019 to £5.3 million.

The company has made changes to the business a few years back, however, no progress could be made due to the the trading conditions prevalent in the United Kingdom; Notwithstanding, the company’s retail performance has been strong, the wholesale business continues to perform well, and the company also continues to see a sturdy  license income.  The order book of the company provides a clear outlook for the performance of the company in the second half in wholesale, however, for the retail vertical, conditions will remain challenging.  On the backdrop of these results the company believes that is on track to achieve its guidance for the full year.

The company was founded in 1956 and has its headquarters in Elgin United Kingdom. The shares of the company was admitted into the London Stock Exchange on 16 October 2017 where they trade with the ticker name SPR. 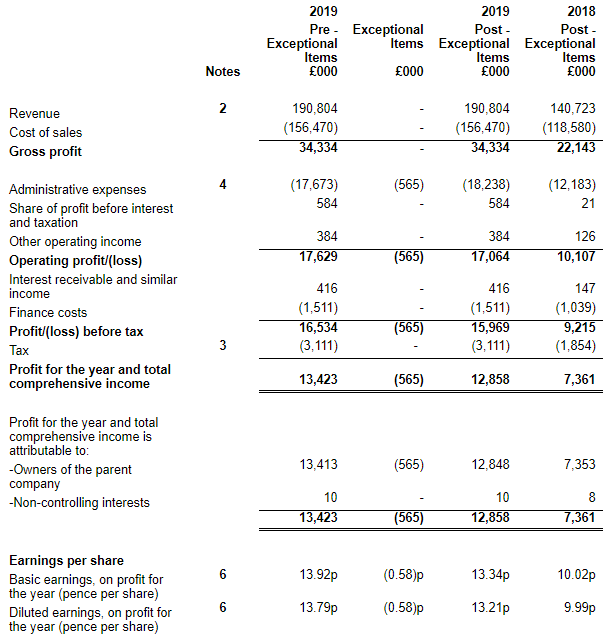 Price Chart as on 17 September 2019, before the market close (Source: Thomson Reuters)

The company’s large land bank will help it to keep busy for up to the next 16 years if the current rate of sales is to continue and its objective on progressing with its active sites and development of future sites will only aid in pushing this time period further. The company continues to integrate the acquisitions of Walker Group and Dawn Homes and is harvesting benefits increasingly with the passage of time.

The company continues to witness strong growth across its verticals. Particularly, the Village development projects are advancing well, and their appeal is strengthening as their footing gets established. This adds further amenities available to residents as other businesses set shop.

The growth of both private as well as affordable housing verticals is aided by strong market conditions. The demand for residences in Scotland far outstrips supply during a period when interest rates and mortgage availability conditions are good. Residential property pricing growth in Scotland beats the rest of the United Kingdom with the Scottish Government still focused on fuelling levels of affordable housing with the intent to hit the target of raising 50,000 new homes by 2021.

Buoyed by the results, the Board of Directors is hopeful to be able to deliver sustained growth, in line with market expectations, and creating value for shareholders.