Rainbow Rare Earths Limited (RBW) is a mining company. The group is involved in the development and exploration of the Gakara project. This project is one of the leading rare earth projects globally and the only African producer. The company's subsidiaries include Rainbow Burundi SPRL and Rainbow International Resources Limited.

RBW has guided 800-900 tonnes of concentrate for the year. Mining operations continued to take place at only two sites.  RBW will need to raise further funds to purchase new trucks and develop additional mining areas. RBW is presently targeting four mining areas and believe this, alongside replacement of the inadequate rented machines with newer, more suitable models, will help to address mining performance issues.

Rainbow plans to rapidly bring Gomvyi Centre and Kiyenzi into production during 2019, helping RBW to hit its targeted run-rate of 400tpm of concentrate by the calendar year 2019. The presence of a JORC Resource will give RBW greater certainty in its mine plan and hopefully lead to RBW achieving its breakeven of 250 tonnes per month. Keeping in mind the serious headwinds faced in the Energy Services business, the company is making progress in assessing the options for its future.

On June 4th, 2019 Rainbow Rare Earths Limited announced that the company had received CPR (Competent Person's Report) from the MSA group and the same had been incorporated into the company’s prospectus which the company presume to publish in the month of July. The CPR includes all the recent strategic developments of the company. It also includes the opening of a new mining area with the latest machinery and the risk associated related to mining are included in the report.

Furthermore, the MSA group has revised its estimates of Exploration Target from 20,000 tonnes to 80,000 tonnes on the high-grade rare-earth vein tonnages as classified by Joint Ore Reserves Committee (JORC) at the time of Rainbow's IPO in 2017 to 27,000 - 103,200 tonnes, a surge of 30% at the mid-point of the range also factoring the account depletion from recent mining production.

MSA has raised concerns on translating the Exploration Target into a Resource. It suggested that some additional work was required. For instance, the high-grade deposits need extensive use of laboratory testing of channel samples (rather than handheld Niton XRF data which was used by the company traditionally. These might require additional computerised vein modelling. For lower grade mining such as Kiyenzi which requires additional drilling and metallurgical testing plus comprehensive laboratory sampling, all of which is scheduled by the company shortly.

RBW has secured a new funding agreement with Pella Ventures (its largest shareholder), of an unsecured 12-month loan for US$0.7m in order to function as a bridge for RBW’s operations. In addition to this, RBW has agreed to pause any further tranches under the existing equity drawdown facility with the Lind Partners. The new funds will be used for general corporate purposes, while Rainbow considers the most appropriate and efficient structure required to finance Rainbow’s proposed new fleet and mining areas but is intended to convert into equity, along with interest at 15% per annum, due to the course on equivalent terms agreed with any new investors. RBW now plans to purchase specialist mining trucks to cope with these conditions. Due to the reduced operating conditions, RBW only sold 100 tonnes of concentrate, but produced 347 tonnes; however, due to timing, only 100 tonnes were exported in Q3. 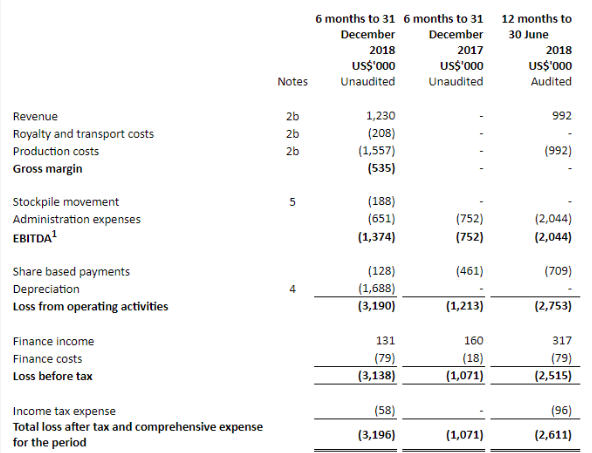 The company’s reported revenue for the period was US$1.2 million against the US$1.0 million for the twelve months to June 30, 2018, while revenue was nil for the six months to December 31, 2017.

The company incurred Royalty and transport costs of US$0.2 million in the current period (six months to 31 December 2017: nil), which included the cost of concentrate transportation. The royalty to the government stood at 4 per cent.

The company employees were awarded in the previous periods in terms of stock options, which eventually led to share-based payments. These payments were recorded over the vesting period, which was stood at US$0.1 million in the period as against US$0.5 million in the six months to 31 December 2017 and US$0.7 million for the full year to 30 June 2018.

Total loss after tax of the company for the period stood at US$3.2 million as compared with losses of US$2.6 million for the year to 30 June 2018 and losses of US$1.1 million in six months to 31 December 2017, due to the commercial production announced from 1 July 2018 and all production costs were expensed.

The company’s current assets were valued at US$0.6 million as on 31 December 2018, down from US$1.3 million at 30 June 2018. This plunge can be attributed to reductions in inventory levels and trade receivables; and mainly due to the timing of exports and sales receipts over the period end.

The Company's cash balance stood at US$56k as on 31 December 2018 as against US$354k on 30 June 2018, excluding the Finbank overdraft facility of US$0.9 million. After adjusting non-cash items and working capital movements, the operating activities consumed US$1.3 million of cash in the period as against US$1.8 million for the year to 30 June 2018 and US$1.1 million in the six months to 31 December 2017.

The company’s capital expenditure for the period stood at US$1.1 million.

The placement of equity shares by the company led to the fundraising of US$1.8 million net of costs in August 2018, which facilitated in the Group's capital expenditure and funding of operating losses.

Daily Chart as at June-28-19, after the market close (Source: Thomson Reuters)

As on June-28-2019, after the market closed, shares of the Rainbow Rare Earths Limited ended at GBX 4.05 and declined by 5.81 per cent against the previous day closing price. As on Jan-30-2017, its shares got admitted to the Alternative Investment Market of the London Stock Exchange for trading.

On a Y-o-Y basis, shares of the Rainbow Rare Earths Limited have delivered a negative price return of 74.29 per cent and performed poorly than the benchmark index over the same period. Also, on a year-to-date basis, the stock has recorded a negative price return of approximately 4.71 per cent. From the past three months, the stock has generated 116 per cent positive returns.

The shares of the company (after the market closed) were trading below the 30-days and 200-days SMA, which shows a negative trend in the stock price movement and could further move down from the current trading levels. However, the stock was trading above the 60-days SMA.

Share's RSI for the 30-days, 14-days and 9-days stood at 50.72, 45.88 and 41.04 respectively. Also, the stock’s 3-days RSI stood at 30.10. The RSI was hovering around a normal range. RSI is a leading technical indicator that measures recent price change magnitude to estimate the overbought or oversold direction in the stock price or other asset classes. If an RSI of an asset class stood at 70 or above, it indicates the stock is hovering in an overbought zone and could pull-back or correct in near-term and in case RSI quoting at 30 or below, it reflects an oversold condition in the asset.