The High Court on 15 September 2020 ruled in favour of the policyholders for the Financial Conduct Authority’s (FCA) business interruption insurance test case. Handing down its judgment, the High Court directed the insurance providers to pay the businesses that were forced to close because of the coronavirus pandemic. The judgment that came after an eight-day hearing brought a sigh of relief for the companies that were compelled to pull their shutters down during the coronavirus-induced lockdown period.

The FCA brought a test case in front of the High Court earlier in 2020 after some insurance companies denied the business interruption insurance claims. It is to be noted that the phrase ‘lost earnings due to a pandemic’ was covered in the wordings of the policy. The Court ruled on a representative illustration of 17 policy wordings that were used by 16 insurance firms.

The judgment read that majority of the clauses related to disease in the sample did provide for a cover.

The insurance companies presented their argument and stated that the insurance policies in question did not cover pandemics, even though some clearly stated that cover was to be provided for notifiable diseases.

Christopher Woolard, interim chief executive, FCA said that the authority was satisfied over the High Court ruling. Woolard described the judgment as an important step towards the resolutions on the uncertainty that the policyholders were facing. He further said that the insurers needed to reflect on the clarity presented by the Court.

The FCA stressed that the insurers should now consider the measures they could take to proceed with the payment on the types of claims that the judgment had provided. This needs to be done irrespective of any possible appeals. The authority further added that the insurance firms need to communicate directly and quickly with the policyholders who have forwarded their claims and have been affected by the judgment to explain the steps ahead. The FCA also mentioned that majority of the business interruption customers or policyholders were not covered for the cononavirus pandemic. So, there remained a disagreement over policies which contained certain clauses.

Also read: Impact of Covid-19 on the Insurance Sector and FCA’s New Directives

Also read: Insurance sector in the UK feels the heat of the pandemic, faces a £1.2 billion payout claim

Impact on the insurance companies

However, it is likely that prior to issuing the claim payment, the insurance companies could appeal the High Court’s decision and delay the payouts. In case the insurers fail to successfully appeal, the judgment given by the High Court would be considered as a legal binding on all the insurers that comprised as part of the test case. As a next step, it is most likely that the insurance firms would appeal the decision. Going for an appeal would mean that the insurers would not make the claim payments in the meantime; at least till the appeal’s process would be fully completed.

Hiscox Ltd (LON: HSX) said that it projected extra pandemic related claims that could come from business interruption at around £100 million net of reinsurance.

The insurer recognized that the pandemic has been a tough time for the businesses and regretted any dispute with its customers on the contract. The firm added that it would seek an accelerated resolution through this test case. It informed that in alignment with the guidelines from the FCA, the insurer would update on the test case to all relevant policyholders via appropriate channels.

Hiscox Action Group that represents the customers of Hiscox who have been denied their insurance claims on business interruption, described the Court’s judgment as a landmark victory. It said that its law firm, Mishcon De Reya wrote to Hiscox for issuing interim payouts to the policyholders.

Quick look at the impact on Hiscox and RSA Insurance 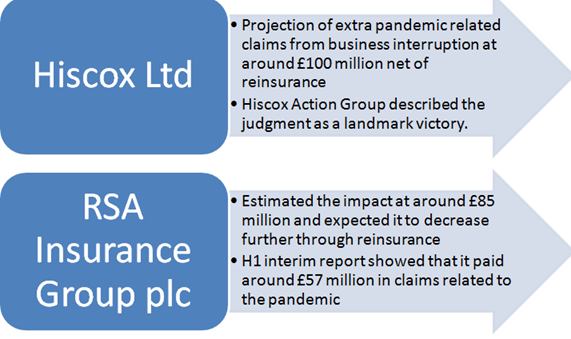 Another British insurance major, RSA Insurance Group plc (LON: RSA) stated that the ruling upheld some of its understanding of the provisions. Post the application of its catastrophe reinsurance protection, the company estimated the impact of this judgment to be approximately £85 million and expected it to decrease further through reinsurance.

However, based on the insurer’s initial review, RSA Insurance estimated the additional financial impact of the judgment to be around £104 million. This projection was on a gross basis across RSA’s portfolio of relevant business interruption policies. In case of an appeal and other legal actions or important rulings on policy wordings that are yet to be considered, then it might affect the company’s estimation of gross figure either upwards or downwards.

RSA Insurance mentioned that it remained committed in responding to the wider impacts of the coronavirus pandemic in the best interests of its customers and businesses. The company informed that it’s H1 interim report presented that it had paid or reserved around £57 million in claims related to losses because of the pandemic. RSA Insurance further added that it has participated in industry initiatives to offer assistance and relief to customers and communities that got affected in all of its territories.

Response from Association of British Insurers

Describing the High Court’s judgment as complex and lengthy that spanned 162 pages and involved 19 policy wordings, the Association of British Insurers commented that those involved in the court case would take some time to understand what it suggested and thereafter consider any appeals. Every insurance firm would carefully analyse the judgment, engage with the regulator, take account of the appeal process, besides keeping their customers informed in the period ahead, explained the association.

However, the FCA said the Court’s ruling provided persuasive guidance on the insurance policies having similar policy wordings and claims. The guidance suggested that it would be tough for the insurance firms to squirm out of making the claim payments. The FCA reiterated that as majority of the business interruption policies would not be affected, so the policyholders are requested to carefully check the wordings of their policies.

The High Court’s ruling in favour of the policyholders in the business interruption case due to the impact of the coronavirus pandemic has brought relief to many businesses. A case was brought against eight insurance firms that included Hiscox, RSA Insurance, QBE, and Zurich, among others, over various business interruption related policy wordings that required coverage for closures due to the pandemic. The FCA said that the court brought clarity to the pandemic related coverage issues for several businesses by ruling in favour of the policyholders. However, it remains to be seen if the insurers go ahead and make an appeal and when exactly would the policyholders receive their claims.