US Market News: The major indices of Wall Street traded in a green zone driven by technology and banking stocks. Among the gaining stocks, Jefferies Financial Group (JEF) shares surged by about 8.42% after the Company’s quarterly revenue and earnings came out to be more than the estimates. Textron (TXT) shares grew by about 2.54% after the Company was upgraded to “overweight” by Morgan Stanley. Boeing (BA) shares went up by about 0.32% after the Company had won a 200 jet order from United Airlines. Among the declining stocks, Factset Research Systems (FDS) shares went down by around 1.29% after the third-quarter earnings per share had missed the estimates.

UK Market News: The London markets traded in a green zone boosted by the housebuilding stocks. Moreover, the Bank of England had reported a rise in the UK mortgage approvals to 87,500 during May 2021, while it was 86,000 during April 2021. According to the Nationwide survey, the annual house growth rose to around 13.4% for June 2021, increasing from approximately 10.9% achieved during May 2021.

D4T4 Solutions shares plunged by about 12.03% after the Company had posted a drop in profitability during FY21. However, the Company managed to show growth in the top-line revenue and subsequently raised the final dividend.

UDG Healthcare stated that it received an increased takeover bid from Clayton, Dubilier & Rice of around 1,080 pence per share. Moreover, the shares went up by approximately 0.47%.

IWG shares rose by around 3.17% after the recent press speculation that the Company was in discussion with the US private equity player CC Capital Partners for a potential takeover offer.

United Utilities Group shares dropped by around 0.97% after Morgan Stanley had downgraded the Company to “underweight”. 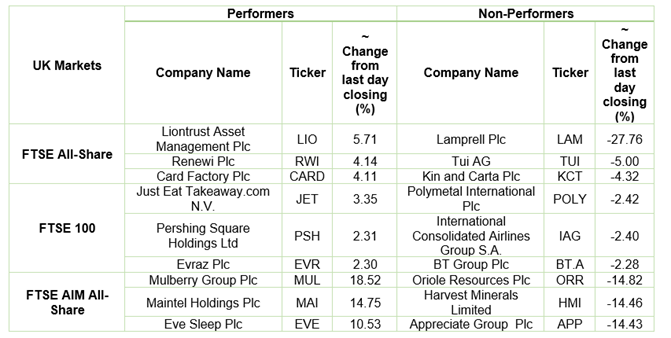