While the company has not confirmed its IPO plans as yet, it is expected to take place by 2021.

The data management company recently raised a significant amount of capital in its latest funding round, raising speculations about whether it would delay a potential Databricks IPO.

Responding to this, the company’s co-founder and CEO, Ali Ghodsi, stated that the latest capital infusion would not push out the possibility of an IPO. Mr. Ghodsi did, however state that Databricks would most likely not take the SPAC route for a public listing.

SPACs have risen in popularity recently, with several tech firms opting to list via a reverse merger with a blank cheque company.

The company recently raised US$ 1.6 million in a Series H round of funding in August, giving it a post money valuation of US$ 38 billion. The company’s latest valuation propelled it into the league of six highest-valued private companies globally. 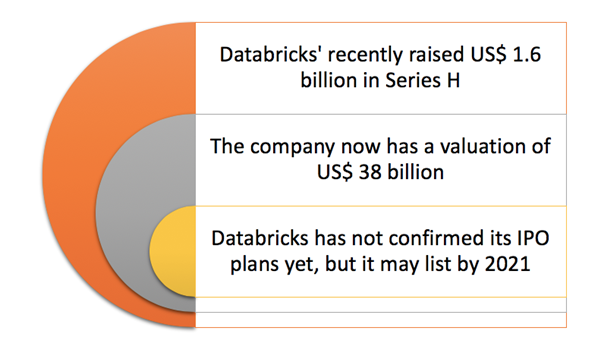 The series H round was led by Morgan Stanley’s fundamental equity arm, Counterpoint Global. Some new investors in this round included UK based investment management company Baillie Gifford, capital markets company ClearBridge Investments and others.

The latest fundraise values the company US$ 10 billion more than its earlier capital raising round.

The company, which was founded in 2013, had previously raised US$ 1 billion in its Series G round of fundraising earlier this year in February.

Databricks has raised a cumulative total of US$ 3.5 billion in its eight funding rounds since its inception.

Related Article: Polestar IPO: What to expect from the listing of this EV maker?

Databricks’ surge in valuation comes as investors are betting the company to be able to sustain its current level of growth. The company’s most recent ARR rose by 41.17 per cent year on year from 2020.

The data management company is aiming to make its Databricks Lakehouse Platform the future of data architecture.

While the AI-driven data processing industry is a huge market, it is also very competitive. Thus, in order for Databricks to surpass its competitors, the company should focus on customer acquisition and retention strategies.