Professor Jonathan Van-Tam, deputy chief medical officer, England said that the UK has to act quickly to avoid any repeat of spike in Covid-19 cases and all the people must follow the rules sincerely. He emphasised that the nation is at a tipping point in the coronavirus led crisis and must take all necessary precautions to circumvent the recent history of the first surge in infections seen in the months of March and April 2020.

Further, a new trend is seen as a serious concern that could swell the number of deaths due to coronavirus infections. This trend is that the coronavirus is now shifting from young adults to older people across the nation, which is unfortunately expected to raise the total casualties, explained the professor.

Medical experts are increasingly pointing out that the fundamentals to keep the disease under check remain the same. Government should keep reminding people to minimise social distancing, use face masks while stepping out, and regular washing or sanitising hands, they insist.

With an augmented number of cases across the nation, the government is preparing a new set of rules to flatten the second wave as soon as possible.

The cases are not just moving up in Britain, they are also exploring throughout Europe. Similar to UK, many European nations like France and Germany have seen a huge upsurge in Covid-19 numbers following the re-opening of different sectors and schools/colleges.

Cases in north of England

Hospitals in the north England are preparing for the worst as Covid-19 cases multiply in the region. Dr. Matthew Tuck, deputy chairman, BMA’s (British Medical Association) junior doctors committee said that the local hospitals were experiencing a similar trend of a tsunami of cases as was seen earlier in the mid of March 2020.

North England ministers have already been cautioned by the doctors that if immediate steps are not taken to contain the upsurge, withing three weeks the region’s ICUs (Intensive Care Units) will be influx with a larger number of cases than during April 2020, when the pandemic saw its first peak.

As per the latest government statistics, the coronavirus infection rate (per 1,00,000 people) is more than 1,000 for the regions of north East (1419), north West (1687), and Yorkshire & the Humber (1292) in England, which is worrisome. These regions would most likely call for the highest level or tier three of new government restrictions.

Overall, the number of new coronavirus cases (daily) detected across England was 10,383 on Sunday 11 October 2020.

The new set of rules are expected to be announced by 6.00 PM BST on 12 October 2020, according to government sources.

The UK government acknowledged that it had no choice but to introduce stricter regulations to control the second wave. According to sources, it is trying to strike a balance between reducing transmissions and helping the economy recover at a sustainable pace, given the uncertainties surrounding the pandemic.

A new 3-tier system of restrictions is soon to be rolled out across England. This new system would be called the Local Covid Alert Levels. It would be classifying the localities under three Covid-alert categories namely the medium, high, and very high.

The exact economic impact of the new restrictions being introduced is yet to be calculated. However, one this is for sure that it will be significant. The British economy had contracted by almost one-fifth in size (Q2 2020) after the first lockdown was imposed on 23 March 2020.

Consequently, the regions on high and very high alert levels are expected to ask the government for greater support than before to support their businesses and people. Sources said that casinos, gyms, restaurants, and pubs might be closed in very high alert areas.

Local leaders have pointed out that the UK government had not consulted them before finalising the new rules. This would add to chaos and confusion, they said.

Tough measures were introduced in Scotland few days back with closure of pubs and restaurants for a two-week period ending 25 October 2020.

Local lockdown rules are also in place across various regions in the Wales. Moreover, Northern Ireland government is also examining the possibility of imposing similar rules.

While many potential vaccine candidates are under trail, not just in the UK but throughout the world, but the possibility of a mass availability within the next few weeks seems doubtful.

Can an old vaccine combat the virus?

Studies have suggested that an existing BCG (Bacillus Calmette-Guerin) vaccine could be used for improving immunity against the Covid-19 virus. Scientists at the University of Exeter, South-West England, UK are now planning to test the efficacy of such claims by conducting human trails for the same.

The trails would be conducted on healthcare and care home workers from south west of England. 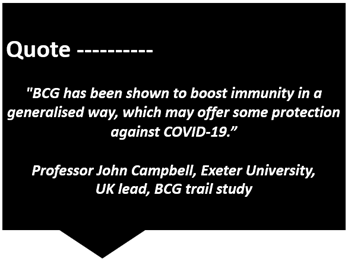 In case the study is successful, healthcare workers, who are at the maximum risk of catching the novel coronavirus infections, could be protected from catching the fatal disease.

The BCG vaccine was stopped in the UK in the year 2005 due to lower TB rates among the population.

The study in UK is part of a global research being led by the Murdoch Children’s Research Institute (MCRI) located at Melbourne, Australia.

It is indeed a very complicated situation and getting a balance between health and growth may not be possible immediately, and the government would have to choose health over economy. While many vaccine related trials are still on, but more clarity will come only when there is a breakthrough. The country, its businesses, and general public have no other choice than to embrace the hard reality and tough times ahead.