The renewables energy sector plays a significant role in lowering carbon emissions, and the UK Government is aiming to bring these emissions to zero by the year 2050. This itself, speaks volumes about the growth potential of the sector in times to come. The renewables produce electricity by using natural sources which can be replaced faster, such as wind, sun, water and biomass. The UK is very well placed for wind power, with high-speed winds available at the both on and off the shores. Biomass uses wastes such as biodegradable waste, food waste and animal manure. Hydroelectric power uses a river or dam water to operate turbines. Marine and wave energy make use of ocean electricity to make power. Solar power is generated from photovoltaic panels that convert the rays of the sun into energy.

The UK renewables is a significant sector, as can be gauged from the fact that its contribution was 36.9 percent to the total UK electricity generation in 2019, based on Government figures. On an absolute basis, the sector generated 119 TWh energy for the year.

Total electricity generation in the UK, 2019 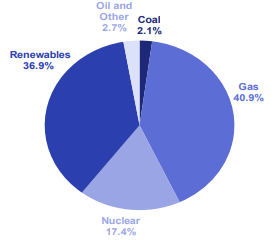 As per the latest stats from the Department for Business, Energy & Industrial Strategy, the UK renewables sector’s capacity stood at 47.4 GW at the end of 2019, almost 7 percent higher than last year.

The main growth driver for renewables generation in 2019 was the offshore wind energy sector, whose production rose by a whopping 19.6 percent from a year before to a level of 31.9 TWh (refer table above). Bioenergy’s contribution was the highest at 36.6 TWh for the year 2019. Onshore wind’s share was a close second at 32.2 TWh for the year. It was followed by Solar PV and Hydro, respectively.

The Government has been supporting the sector with tariffs and subsidies to promote alternate energy production. Investments in the sector also get a boost with almost nil interest rates, a downward trend in system costs and the latest technologies being adopted by the sector.

Another feather in the hat is that the UK is amongst the top six nations in the latest EY Renewable Energy Country Attractiveness Index. The Government is also soon bringing amendments to the Contracts for Difference (CfD) scheme to allow onshore wind and solar projects to bid for funding beginning 2021.

Looking at the recent history of major players, and also their steady expansion plans, coupled with a thought-out long-term strategy, suggests that the sector could be in a position to deliver a stable long-term return to investors. That is the reason many new investors like private equity funds, Government traded alternatives, and institutional players are also investing in the renewables.

Latest development in companies from the renewables

Despite the corona disruption, one of the few sectors that seem to be performing well in this sector. SSE Renewables is one of the biggest renewable energy producers in the United Kingdom, and is a subsidiary of the FTSE listed SSE plc, it has a capacity of 4GW of onshore wind, offshore wind and hydro based energy.

SSE Renewables has recently entered into a 50:50 joint venture with Norway based energy company Equinor to operate and maintain Dogger Bank offshore wind farm, whose construction began in January this year. The project is divided into three phases, each with 1.2 GW production capacity. It is likely to generate more than 200 jobs and aims to meet the electricity requirements of 4.5 million houses across the nation. It will require a capital investment of £9bn by the year 2026.

Turnover of another leading green power player Ecotricity rose to £ 201 million for 2019 from £176 noted last year. It’s gross profit numbers also jumped to £56 million, up by a million since the last year numbers.

To combat the fall in electricity consumption due to the corona disruption, the renewable major Octopus Energy used an innovative method of paying its household consumers to increase energy usage. It asked the customers to use a flexible tariff called Agile that paid four-pence to use electricity in certain periods of the day, as a grid balancing measure. Octopus Energy supplies power to 1.5 million houses across the United Kingdom. Australian company Origin Energy recently acquired a 20 percent stake in Octopus, giving it a unicorn status.

Another big development for the sector is that Hornsea One, the world’s largest Offshore Wind Farm, located in the UK is ready to start operations soon in 2020 itself. The farm is sized at 400 sq km, located in the North Sea, 120 kms off England’s coast. It will be meeting the energy needs of close to 1 million UK homes. The farm’s energy generation capacity will be more than 1200 MW.

Companies seem to be operating in a more or less competitive environment with the use of latest technologies, which have broken the high cost-entry barrier. These low-cost renewables have a bright future, considering the scope of expansion and hopefully use of fossil fuels for producing energy in the United Kingdom, to be accomplished over the next few years. Afterwards, the companies with their first-mover advantage can go global and the sky is the limit.

The positive effects of corona fiasco

It cannot be denied that some delays have come about like the supply chain disruptions with the lockdown, delayed constructions, approvals, system installations, and a rise in financing costs for clean energy projects. The UK Solar Trade Association has also confirmed that around 1GW of new solar construction is likely to be postponed in 2020.

Renewable Energy Association has pointed out that select biomass power plants dependent on imported wood pellets, had to face problems. At the same time, established wind and solar plants continued to generate electricity.

At the same time, there are huge positives too! The clean energy investment company Cubico, which owns 300MW of renewable assets in the UK confirmed that the energy created and sold in 2020 has been higher than was earlier predicted.

A new record for solar power was established in April 2020, with solar farms powering nearly 30 per cent of the grid at their peak, due to bright weather and low pollution. In fact, post that development the UK is setting a record for the longest period of the grid being operational without the tradition fuel coal - 39 days as of May 19, 2020, and still counting. This was achieved with a big drop in electricity demand since lockdown began, pushing few coal power plants going off the grid, but wind and solar kept servicing the need as they have preferential access to the grid. This is a very big unprecedented push for renewable’s growth. Moreover, the demand for electricity will shoot up as economies resume the normal scenario and consequently, it will boost the renewables sector all over again.