Why to explore 4 NZX Infrastructure stocks this year?

Over 48K homes were given consent for the year to November 2021. However, Building Industry Federation chief executive Julien Leys stated that the construction industry might not be able to construct all of them as there were not enough builders or materials.

Some builders have been contracted for another 12 to 24 months, and there is a shortage of skilled labour, such as carpenters and truck drivers amid border restrictions caused by the COVID-19 pandemic.

Due to supply-chain bottlenecks, many builders were planning ahead and putting orders for materials considerably earlier, according to Leys.

On this note, let’s look at how these 4 NZX infrastructure stocks are doing. 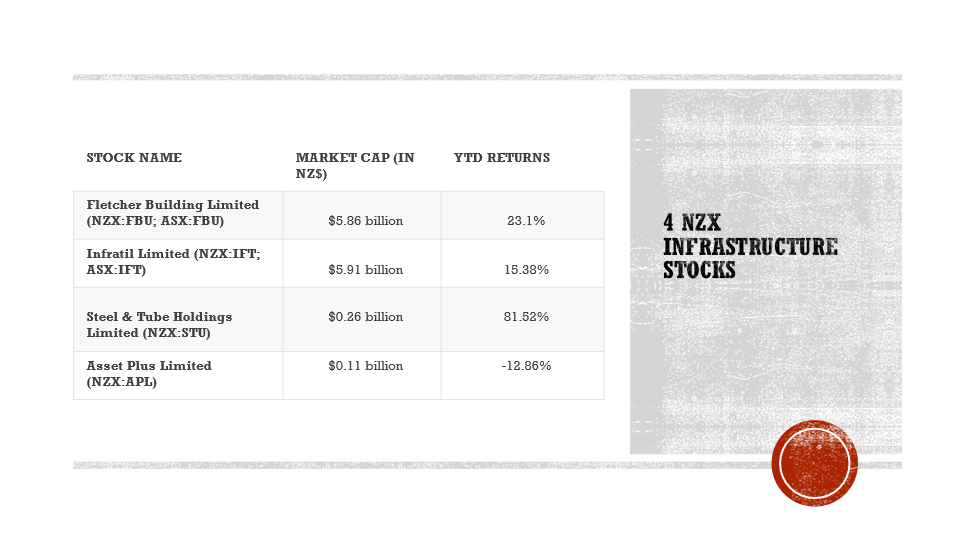 Construction and infrastructure company Fletcher Building registered a revenue of $8.1 billion as well as net earnings of $305 million in FY21. The Group gained the advantage of a robust residential market in NZ, but its Australian operations were impacted due to a sluggish commercial market.

RELATED READ: Why consider these 5 NZX infrastructure stocks in 2022?

Fletcher has planned to achieve an EBIT margin target of 10% by FY23. Increased vaccination, a rational approach from the Government to reopen the economy would help FBU in delivering value to shareholders.

Infrastructure investment company Infratil stated on 5 January that its stake value in CDC Data Centres had increased by 15% in prior 6 months. The firm revealed that its 48% interest in CDC was likely to be between AU$2.669 billion and AU$2.862 billion.

DO READ- Infratil (NZX:IFT): Is there an increase in its CDC investment?

CDC has plans to grow to Melbourne with the first period of construction likely to begin soon. Infratil also stated that there was no alteration in CDC supervision for FY22.

Commercial property investment company Asset Plus faced a tough period amid the COVID-19 pandemic and earned $2.52 million in total comprehensive income for the 6 months ended 30 September 2021, down from $11.53 million in pcp.

APL intends to efficiently build up the Munroe Lane project while retaining a positive cash flow.

The infrastructure sector is a key driver of an economy and plays a significant role in speeding up a country’s overall development.