Financial companies, like banking, insurance, brokerage, and investment companies play a vital role in every economy. They channelise as well as regulate the money supply within the economy, thereby bridging the gap between idle savings and investments.

Moreover, they act as government agents to regulate liquidity in the economy. Hence, the importance of financial stocks can never be undermined. 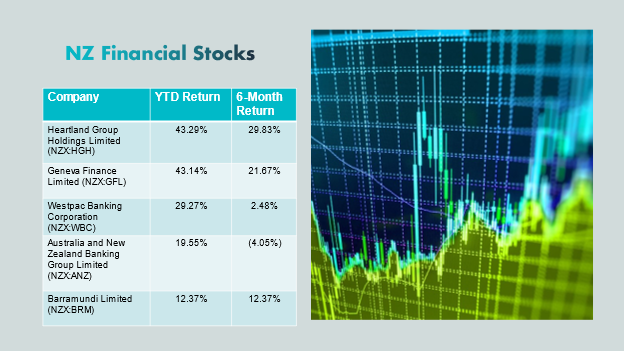 First, we would talk about Heartland Group Holdings Limited, a leading reverse mortgage provider across Australasia. As per the latest update from the Company, HGH will organise an in-person Annual Meeting in Auckland on 28 October.

Also, the company would continue to hold an online meeting at the same date and time.

However, in case of any potential risk to hold the meeting in person, the Company would intimate its shareholders on the same, well in time.

At the closing bell, on 21 September, Heartland Group Holdings traded flat at NZ$2.330.

We would now look at Geneva Finance Limited, which offers consumer credit as well as financial services to small and medium businesses.

The Company recently published the results of its Annual Meeting, wherein resolutions were passed to re-elect the Company's director as well as to authorise the Board to fix the fees and expenses of auditors for FY22.

Westpac Banking Corporation is one of the largest banks operating in Kiwiland. The Company has released its ESG update, wherein climate change is given a strategic priority.

Moreover, WBC aims to strengthen its risk management, governance, and accountability, along with improving control over its processes.

Further, the bank is focused on working closely with its regulators to speed up the closure of its outstanding investigations.

Related Read: What are the top 10 NZX-listed financial companies?

Coming up next is Australia and New Zealand Banking Group Limited, which is headquartered in Melbourne and is the largest banking group across New Zealand and the Pacific.

Recently, the Company revealed that it had reached an agreement to switch its customers to the CMC Markets-branded platform from the earlier ANZ Share Investing platform, which is in line with its strategy to simplify banking operations.

Topping off the list is Barramundi Limited, which invests in the Australian equity market. The Company recently revealed that in order to calculate entitlements under DRP, i.e., Dividend Reinvestment Plan, BRM has set its share price at NZ$1.0188.

It is noted that the Company would pay an interim dividend on 24 September.

Financial stocks help in mobilising savings and investments, thus driving economic activities in a country and help in its progression.