In a historic turn of events, the Reserve Bank of Australia (RBA) has finally announced its biggest and first cash rate hike since 2010. The official cash rate has been increased by 25 basis points. The decision to raise the interest rates was taken by the RBA amidst surging inflationary pressures. The RBA also increased the interest rate on Exchange Settlement balances from zero to 25 basis points. 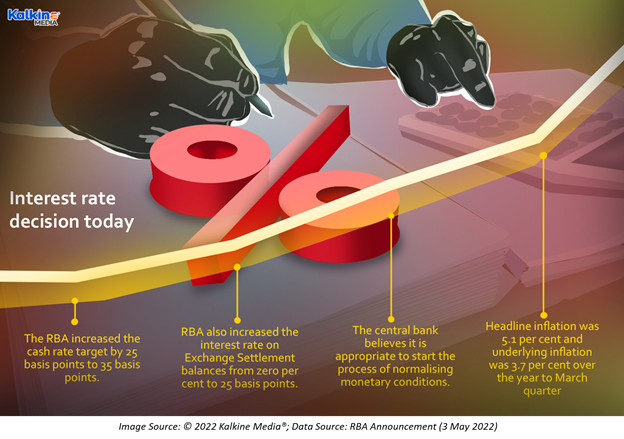 The decision did not come as a surprise, as many experts had predicted that the RBA would increase interest rates in May itself. However, the magnitude of the rate hike came as a shock to many. The cash rate now stands at 0.35% after the 25-basis-point hike. Most experts had expected a far more modest rate hike, and a few others were bracing for aggressive tightening by the RBA in May.

TITLE: Australia raises interest rates for the first time since 2010

The May hike comes in line with the predictions of the three of the big four banks that had revised their forecasts from June to May. Only the Commonwealth Bank of Australia (CBA) had stuck to its original forecast of a June rate hike. Keeping the timeline aside, a rate hike is set to impact the borrowing population significantly and make financial conditions tighter across households.

DO NOT MISS: Five ways to prepare for interest rate hikes

With the Australian elections underway, the interest rate decision plays a crucial role in changing the public’s perception of the current government. Though the Morrison government has introduced policies targeted at easing the cost-of-living pressures, the interest rate hike would diminish the purchasing capacity of households.

Is the current rise in interest rate justified?

In 2020, the RBA reduced interest rates as the lockdown pressures started weighing heavily on the economic growth. The Reserve Bank commonly uses monetary policy as a tool to control the existing money supply in the economy.

However, as economic recovery started becoming evident and growth picked up, market pundits started anticipating a rate hike. In its latest monetary policy announcement, the RBA clarified that it believes that it is now time to pull out the monetary support from the economy. The economy has stayed resilient, and inflation has risen beyond expectations. Interestingly, wages growth has also been picking up, prompting the RBA to take the decision at this point.

The RBA is one of the few banks that delayed its rate hike decision till May 2022. Even the US Federal Reserve had taken the momentous decision in March, with a similar 25 basis point hike.

Which factors drove a May rate hike?

The months building up to the rate hike decision were full of worrisome factors that had forced the RBA to take a decisive stance. The central bank’s patient stance was lost in the previous board meeting itself as the Russia-Ukraine war was raging in the backdrop. This receding patience had tipped off most market forecasters that a rate hike might be closer than it seems.

Additionally, Australia has outperformed expectations as it has remained relatively stable even as many other economies slowed down. The central forecast is for the Australian GDP to grow by 4.25% over 2022 and 2% over 2023. A rise in business investment and a large pipeline of construction work have kept the market sentiment buoyant.

However, two factors played a critical role in this month’s policy decision:

Domestic capacity constraints have also meant that global pressures have been easily passed on to the consumers. Additionally, wages growth has also seen a modest rise. The March quarter wages data would be released by the Australian Bureau of Statistics (ABS) on May 18. The central forecast for 2022 is for headline inflation of around 6% and underlying inflation of about 4.75%. By mid-2024, headline and underlying inflation are expected to moderate to around 3%.

Together, these factors have persuaded the RBA to raise rates so that inflation can be brought back within the target range over time. Consumers can expect a future stream of rate hikes by the RBA.

ALSO READ: Which policies are unveiled by Australian opposition ahead of elections?