The exacerbated pandemic situation rampant across the globe has hit the nations with massive economic shocks. Amidst the faltered economic scenario, the leaders representing the major economies are virtually attending the 15th meeting of Group of Twenty (G20) on 21-22 November 2020. The meeting, initially scheduled to be held in Riyadh, Saudi Arabia, will be chaired by King Salman bin Abdulaziz Al Saud.

Saudi Arabia, which is first time holding the event, will be presiding on various socio-economic issues across the globe.

The G20 summit, originated in 1999, was elevated in the wake of 2008 global financial crisis. It subsequently focusses on macro-financial issues, socio-economic and development issues. This year’s meet held against the backdrop of global economic crunch is expected to be of considerable importance given the world is currently experiencing financial crisis déjà vu.

The economic situation now, by and large, resembles the 2008 financial meltdown, which triggered the annual G20 meet. The similarities can be drawn with respect to massive job losses, prevailing uncertainty, and economic contraction that has commanded global attention, demanding a unified approach to tackle the worsening scenario.

ALSO READ: COVID-19 Patients fill over 40% of ICU beds in Paris, an alarm bell for Europe?

What is G20 and its Member Nations?

​​​​​​​​​​The Group of Twenty is an international forum of the world's largest economies built to ensure monetary cooperation, convening leaders from both the developed and developing nations across all the continents. The members of G20 constitute approximately 80% of the global economic output, over 66% of the worldwide population and 75% of international trade. 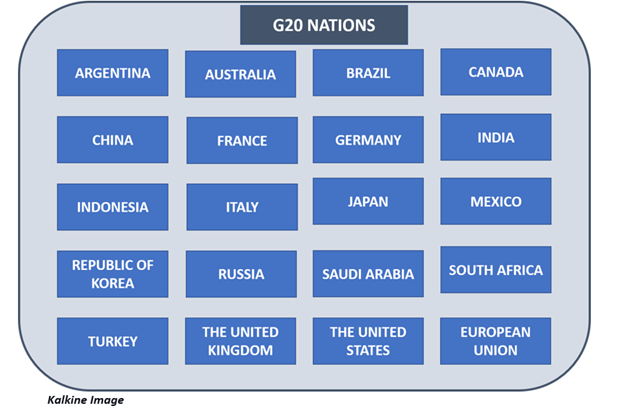 Focus of the Summit this Year

The focus of the summit would be geared towards offering growth and development prospects across different aspects. The comprehensive nature of the theme is expected to typically ensure continued development of diverse areas of the society amidst severe challenges and innovations.

The recent climatic mishaps, political turmoil and many other issues, including the COVID-19 pandemic have remained rampant that defies the growth potential and efficient lives of people. Often women and youth are more vulnerable to the social and economic challenges, which can primarily affect their lifestyle and their ability to meet necessary needs.

Meanwhile, the trade tensions have been mostly visible amidst the landscape of innovation, which together demands cooperation across various aspects from most of the economies. In the wake of the challenging times, the summit would focus on encouraging the countries to not act on their own interest but look for the global public good, ensuring the sustainable development of the world.

ALSO READ: What is the Regional Comprehensive Economic Partnership?

As the G20 summit, under the presidency of Saudi Arabia is all set to manoeuvre the member nations for achieving the broad theme, the collective roadmap would be focussed on three aims.

The member nations are expected to generate conditions favouring the liveability, employment, and prosperity of all. It will involve further initiatives to offer encouraging prospects to women and youth, thereby boosting their financial inclusion.

Meanwhile, people-empowerment is expected to be further targeted through a focus on the protection of all workers, promoting education, skill-development, and escalating health systems. G20 summit will also consider the creation of inclusive tourism destinations for economic growth prospects.

The summit is expected to focus on garnering collective focus through minimising land degradation, food loss and waste while improving water management. The meeting will also hold an agenda on sustainable usage of energy sources to foster cleaner and sustainable energy systems.

The technological innovation and digital empowerment have been the primary driver of global transition in the current era. G20 is expected to focus on the incorporation of long-term collaboration on such areas for confronting the growth impediments while also leveraging digitalisation benefits across the nations. It would also encourage infrastructure development, maintaining the momentum of artificial intelligence and smart cities' development. Meanwhile, the cyber risks which have grown exponentially along the new development would also be focused on the meeting.

ALSO READ: Ransomware Attacks on the rise in APAC Region, Businesses forced to pay up

The pandemic scenario spreading like wildfire has exposed both the interrelation and vulnerability of the global economies. Extraordinary G20 Leaders' Summit held in March was dedicated to fighting the pandemic by encouraging health measures and providing finance to handle the health emergency. The focus of the meeting was also on safeguarding the global economy, addressing global trade disruptions and enhancing international cooperation.

G20 member nations undertook a range of initiatives to fight against the global pandemic. Some actions include:

As the pandemic is still raging with cases rising in Europe, the US and many other parts of the globe, the concern to ensure global support has been vital. Amidst such situation, the upcoming G20 meet id expected to address the vulnerabilities while exploring solutions to lay down the foundation for the prosperous way forward.