The analysts are tailoring rising expectations of a cash rate cut and lower yield curve target by RBA in its October meeting. Recent economic data has further enhanced the speculations.

August value of exports dipped by 2% M-o-M, while import values reduced by 7% M-o-M. While $4.3 billion goods trade surplus is recorded for the month of August.

ALSO READ: How did the economy get affected by the pandemic?

What to Expect from the RBA’s Next Month’s Meeting?

Speculations are rife that the RBA might reduce its cash rate target in the October meeting.

RBA’s Deputy Governor, Mr Guy Debelle, in a speech titled "Australian Economy and Monetary Policy", charted the possibilities for further monetary policy action if the Board decided that it is necessary for the economy.

He stated that the Board would continue to evaluate the advantages of the range of monetary options, and the support package can be modified to support economic recovery. Mr Debelle outlined four possible options the central bank has at its disposal for monetary policy stimulus. 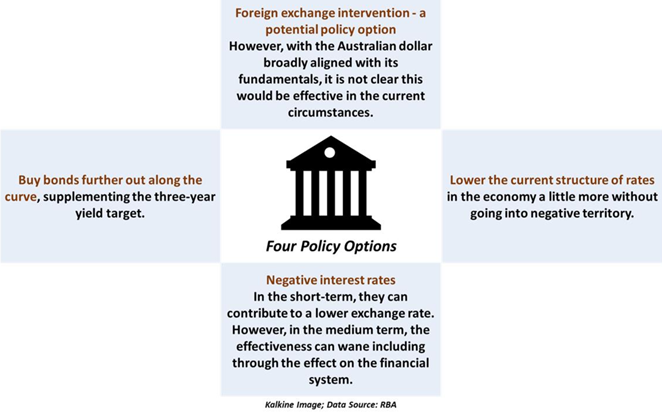 Besides, market experts expect the central bank to announce additional cheap loans for commercial banks and more aggressive buying of government debt in the upcoming meet.

RELATED READ: All that you need to know about RBA's toolkit

NAB has altered its monetary policy view and now perceives a substantial risk of RBA easing the policy in either October or November meeting. Although, there are chances that the RBA may vacate the stage for the federal budget on October 6 and wait until November for additional monetary policy stimulus.

Further, NAB rate cut bet also anticipated that RBA would declare absolute quantitative easing purchases in the 5-10 year area of the curve to lower longer-dated rates to provide stimulus through portfolio rebalance or a lower AUD. For this, a proposed quantity of bond purchases per period will be needed to be announced.

Westpac joined NAB in revising its forecast with the bank now expecting a rate cut of 15 bps in October, taking the cash rate and 3-year bond yield target from the present 0.25% to a low of 0.10%.

Bill Evans, Chief Economist of Westpac stated that it is expected to be a Team Australia moment where RBA is directly supporting a bold Federal budget, which is to be announced later that day. He added that RBA sitting back to evaluate the Budget was not suitable in these unique times.

Mr Evans also stated that there is no real case for RBA to hold rates until later this year. He added that the medium-term projection is that the unemployment rate is expected to be around 7% by the end of 2022 and the demand shortfall will act as a significant brake on economic recovery. This outlook is unlikely to change in November forecast revisions.

The Australian dollar (AUD) weakened on 23 September on increasing speculations of a further monetary policy easing as early as next month. The drop in AUD came after the speech of Mr Debelle in his address to the Australian Industry Group where he hinted on a further easing of the policy.

RBA also stressed that a lower AUD has the potential to aid the nation’s growth prospects from the coronavirus crisis.

Westpac has forecasted a 15 basis point (bps) cut to the cash rate and its yield target to 10 bps at the next policy meeting due on 6 October.

The domestic currency may remain under pressure in near term amidst potential withdrawal of government aid and distressed AU-China trade and political equation.

ALSO READ: How are AUD and Yuan Faring Against the Greenback?

Though the RBNZ has kept the OCR on hold recently, the central bank is expected to cut the cash rate prior to March 2021.

The central bank is planning to unveil a Funding for Lending Programme (FLP) before reducing the cash rate next year. FLP is a low-interest rate programme for banks, targeted at reducing the cost of funding and supporting the flow of credit in the economy.

Importantly, the central bank is also open to negative interest rates, which it intends to undertake in combination with FLP.

With interest rates prevailing at rock-bottom levels, there is a high likelihood that both the RBA and RBNZ will assess additional policy options to revitalise their respective economies.