The Chinese U.S Crude oil imports have increased more than two folds as compared to the imports registered in the year 2018 and US-China trade relations were on a better footing. U.S crude inventory fell to 496 million barrels in the first week of September. This is the lowest level since April and is expected to decline further.

U.S imports from Saudi Arabia declined in the month of July and August. Saudi Arabia has been abiding by the production output cut deal as decided by the OPEC+ countries. 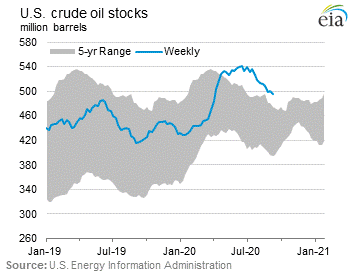 The OPEC+ nations followed the production cut accord for the entire month of July. China is also in compliance with the first phase of the “Trade Deal”.

Also Read: OPEC And Russia Meet to Push for Iraq and Nigeria Compliance

The crude oil prices have shown little upward movement since July. But the future market is still susceptible to the price, which can be witnessed in the widened gap between the prices of near-term and longer-term stocks. The widened gap may be the indication of reduced purchase from the downstream industry, or it may also indicate an increase in the supply, which in turn suggests a slower rate of growth in demand in the global market.

According to OPEC statistics, the global crude oil demand will stand at about 90.2 million barrels of oil per day. The demand from OECD countries is expected to rise more quickly because of the early recovery from the Covid-19 crisis and better performance of other sectors of the economy. The demand is forecasted to be weaker in non-OECD countries, particularly in Asia.

Fear of the second wave of the virus spread and no availability of potential vaccine soon is still plaguing the market. Demand from other sectors of the economy has also dropped as people have opted to buy only essential items and have curbed their spending habits. The transportation sector is the second-highest consumer of crude oil. Since demand is low in the economy for the non-essential items, the transportation system is yet to pick up steam, and thus, lesser will be the growth in demand from this segment. The OPEC estimates that global demand for crude oil in 2021 to increase to 96.9 million barrels per day.

The crude oil Future market is optimistic about improving the economic situation with each passing day. But the formation of contango is inducing doubts in the minds of Hedge funds and other fund managers. They are not in a position to take a clear stand on the trend of the crude oil market. At the same time, the USA inventory stockpile is decreasing, OECD Europe’s stockpile has also reduced indicating increased refinery operations and demand for the finished products. Also, the second wave of Covid-19 has been not reported on a large scale, and some news from Russia of developing the potential vaccine might bring positivity in the market and, help in increasing the demand to pre-pandemic levels.