Piedmont Lithium Limited (ASX:PLL) has been gaining traction in the market since the Company mentioned in an announcement that it would be resuming drilling activities for increasing mineral resources at the Carolina Tin-Spodumene Belt on 26 August 2020.

The stock is currently under a trading halt over the voluntary suspension of trading by the Company in relation to the release of a pending query regarding response to price and volume query.

However, ahead of the trading halt, the stock of the Company had witnessed a price boom along with the shift in the shareholding pattern.

Let’s analyse the series of event and shift in shareholders sentiment step by step around the stock in an effort to fathom out what’s cooking in the market.

The Company resumed drilling at the world-class Carolina Tin-Spodumene Belt (or TSB), consisting of ~ 5,600 metres, and the primary objective of the Company is to explore Target areas on the core and central properties along with untested regional properties bearing occurrences of spodumene.

The core property of the tenement is at the eastern region, and around 50 per cent of the total drill holes would test the same region with two Exploration Target areas identified by the miner previously. Apart from that, PLL would additionally explore Area 5, which is outcropping mineralisation containing assays of 2.10 per cent of lithium oxide.

Furthermore, PLL would also test several areas of low mineralisation around the region to determine the potential of those regions or else its utility for being a suitable area for waste rock storage or mine infrastructure.

The Company would test the previously identified Exploration Target in the region with 5 drill holes to build on the Phase 4 drilling results. Furthermore, two holes would test the south and downdip of the intercepts previously reported by the miner in Hole 19-CT-019 of 36.0m @ 1.11 per cent of lithium oxide and 44.9m @ 1.30 per cent of lithium oxide.

The remainder of the drilling would deal with this area with drilling at Area 1 targeting a large and robust soil anomaly along with outcrops of pegmatite bearing spodumene that range up to 2.37 per cent of lithium oxide.

The Company suggested that at the regional property, Area 2 and 3 would initially receive limited drilling, targeting soil anomalies and spodumene outcrop. Apart from that, soil anomalies and newly identified pegmatite bearing spodumene would be targeted at the Sunnyside.

Change in the Shareholding Pattern

PLL witnessed a substantial change in the shareholding pattern in the recent past with AustralianSuper –one of the largest Australia’s superannuation and pension fund increasing its position in the Company by 12.70 per cent at 146.73 million shares.

The recent turn around the shareholding pattern is as below:

Following the announcement of the change in the shareholding pattern, the stock of the Company went under the trading halt in the wake of a pending announcement.

On 18 August, after hitting an upper circuit, the trading was suspended for PLL, and the barricade is yet in front of the bulls. 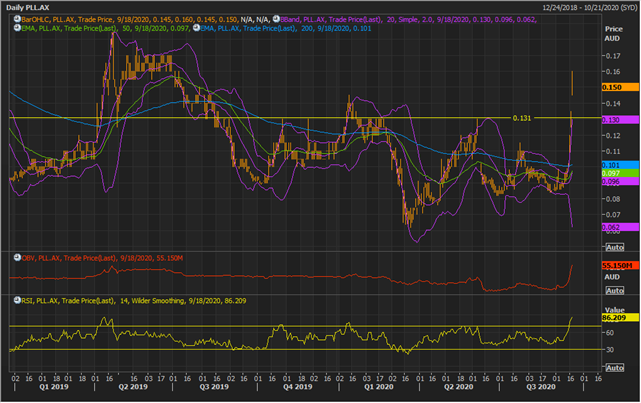 On following the daily chart, it could be seen that the stock witnessed a sudden splash in a downturn to give a breakaway gap above the horizontal resistance level at $0.131, reflecting on a large capital influx or buying interest in PLL.

In a nutshell, post the announcement concerning the restarting of drilling at the TSB, the stock has witnessed a sudden change in sentiment and a lot of ownership shuffling. Considering the spike in RSI and OBV it could be assessed that the stock might show some price volatility in the near future.