In the last week, benchmark Brent Crude Oil futures rose 4% while WTI Crude Oil futures jumped 5% after the EU set out an embargo on Russian oil as part of its toughest-yet package of sanctions over the conflict in Ukraine.

The EU is tweaking its sanctions plan, hoping to win over reluctant states and secure support from the 27 member countries.

Additionally, the fear of future supplies has weighted the concerns related to lower demand in China amid prolonged lockdowns.

Earlier in the last week, crude oil prices dropped significantly after China stated that the country’s economy contracted for a second month to its lowest since February 2020 because of COVID-19 lockdowns, as per the factory activity data. 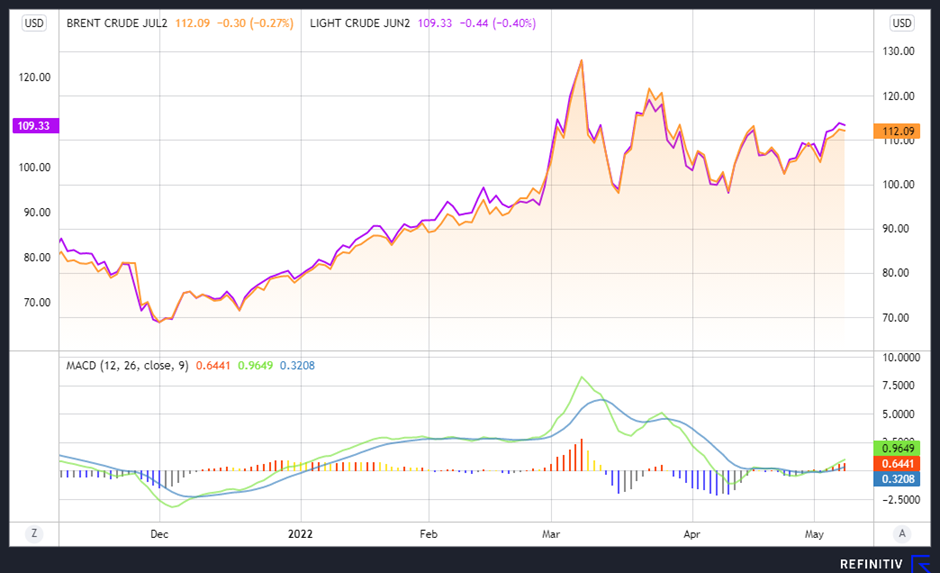 In the near term, the fundamentals for crude oil are bullish, an economic slowdown in the future is the only fear that is holding the commodity back.

Ignoring calls from Western allies to boost crude oil output, the OPEC+ stuck with its plan to raise its June output target by 432,000 barrels per day. The decision has put pressure on future crude oil supplies.

Regarding the lower supplies, a U.S. Senate panel advanced a bill on Thursday that could expose OPEC+ to lawsuits for collusion in boosting oil prices.

Furthermore, investors expect an increase in energy demand from the US, this autumn as Washington unveiled its plans to buy 60 million barrels of crude to replenish its emergency stockpiles.

Crude oil prices gained nearly 1.5% on Friday on prospects of as forthcoming European Union sanctions on Russia which raised the possibility of tighter future supply.