Shopify (SHOP) vs Amazon: Which tech stock is better buy amid selloff?

E-commerce stocks like Shopify (TSX: SHOP) and Amazon (NASDAQ: AMZN, AMZN: US) flourished during the worst spell of COVID-19 as people worldwide switched to a digital lifestyle. But as the pandemic restrictions relax, consumers are slowly returning to stepping out for shopping as more physical stores and malls open back up.

As a result, both Shopify and Amazon seem to be having a very similar experience: a slowdown in e-commerce activities and significant stock price declines amid a prolonged tech stock selloff.

Is one of them still a better option to explore than the other amid the ongoing selloff? Let's find out.

As Shopify and Amazon vary in market size (market capitalization), their financial numbers also reflect notable differences. However, one can consider year-over-year (YoY) change to analyze which one did well in Q1 FY2022.

Shopify posted US$ 1.2 billion in total revenues in the first three months of FY2022, up by 22 per cent from Q1 2021. The Canadian company reported a net loss of US$ 1.47 billion in the latest quarter, significantly lower than a profit of US$ 1.3 billion in the previous year's quarter.

Meanwhile, Amazon recorded a seven per cent increase in its net sales to US$ 116.4 billion in Q1 FY2022 compared to the same quarter a year ago. This US-headquartered e-commerce giant also posted a net loss of US$ 3.84 billion in the latest quarter, down from a profit of US$ 8.1 billion in Q1 2021. 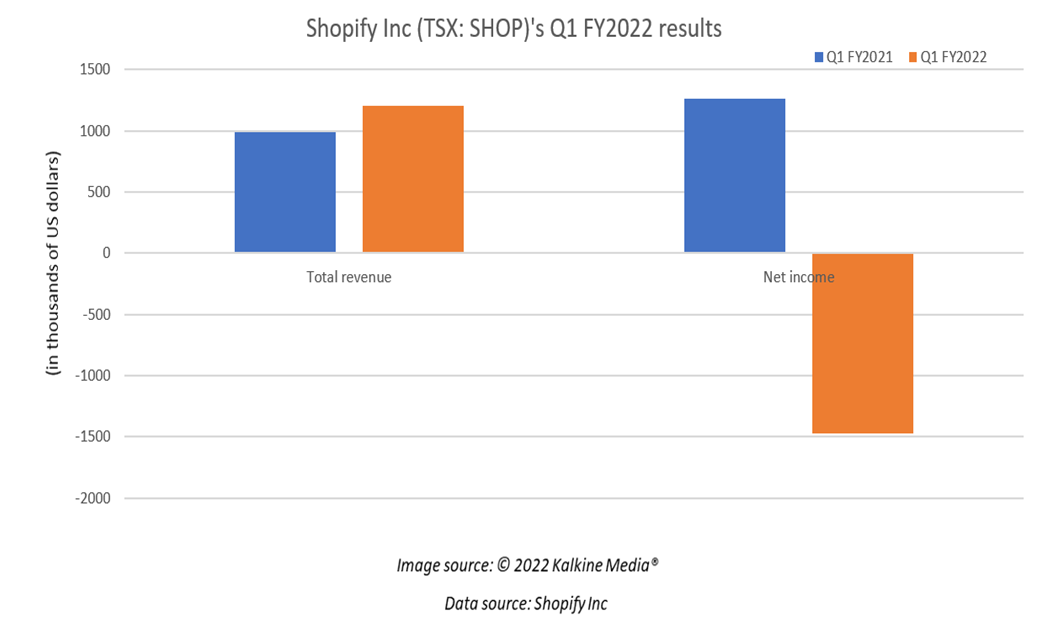 Stock performances of Shopify and Amazon

Some market experts believe that though Shopify appears to be more volatile than Amazon at the moment when comparing their stock performance, Shopify's lesser market size could hold significant return potential with evolution in consumers' shopping habits supported by its growing e-commerce infrastructure.

It is also worth noting that these tech giants are still expanding their e-commerce footprints. Also, despite the ongoing market scenario, online stores are gaining popularity and e-commerce players are likely to see massive growth over the years.