Between 2017 to 2019, the Canadian oil and gas industry provided C$ 10 billion in average annual revenue to governments, and that amount helped pay for schools, hospitals, and roads.

The S&P/TSX Capped Energy Index, which also tracks the performance of oil and gas companies, has witnessed stellar growth this year. The index has surged 73.4 per cent year-to-date (YTD), indicating that these companies' stocks have been performing well.

One stock seems to be multiplying and has even outperformed the Toronto Stock Exchange (TSX) 300 Composite Index in the last 12 months. In this article, we will further explore Ovintiv Inc. (TSX:OVV), an oil and gas company that has surged by 285 per cent since the past year and outperformed the composite index.

Ovintiv is a leading North American company engaged in the production and exploration of hydrocarbon. In addition, it works to produce crude oil and natural gas products.

All you need to know about Ovintiv (TSX:OVV)

As per the company website, Ovintiv aims to be at the forefront of producing oil and gas sustainably and achieve profitability. Since 2018, the company has generated free cash flow every year and have returned around US$ 2 billion to the shareholders.

The company claims that it is a leading operator in every basin and has a proven track record of safely delivering reductions in cash costs and capital in every part of its business.

As the company focuses on sustainability, it could get subsidy benefits at some point in time as both Canada and the US is committed to reducing carbon emissions. Ovintiv says that it will continue to adopt innovative ways of providing reliable, safe, and affordable energy.

Stock and financial performance of Ovintiv 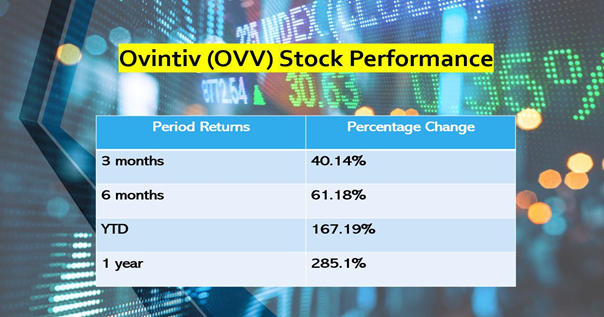 In the second quarter of fiscal 2021, Ovintiv generated US$ 750 million cash from operating activities. In addition, the oil and gas producer reduced its net debt by US$ 1.2 billion to US$ 5.2 billion.

Ovintiv has accelerated the expected timeline of the US$ 4.5 billion net debt target by the end of this year. It also announced a 50 per cent increase to quarterly dividends, and this would represent a dividend of US$ 0.56 per share of common stock on an annualized basis.

An investor must be careful before investing in any stock as the equities market are volatile, and price fluctuations could occur anytime.

If you are interested in this stock, it is essential to study the company's stock performance, its business operations, and its fundamentals. Doing your research could help you in making the right decision.