The stock of Arbutus Biopharma Corporation (NASDAQ:ABUS) soared 15 per cent during pre-market hours on Thursday, December. The biotechnology stock gained momentum on December 1, after the company announced that a court gave a ruling in its favour.

During the trading session on December 1, the stock jumped 44 per cent to close at US$ 4.61 per share. So, let's explore further about the stock and find out why it is soaring.

Arbutus Biopharma is in a competitive fight with Moderna over lipid nanoparticle (LNP) technology patents. Moderna wants to skip paying royalties on the LNP technology as its vaccine for the coronavirus relies on it.

However, the US Patent and Trademark Office supported Arbutus Biopharma's LNP patents and reaffirmed its decision not to invalidate them.

LNPs are fat bubbles that cover RNA-based therapies and vaccines. It can travel via the bloodstream and licensing this technology has long been a part of Arbutus' business strategies. 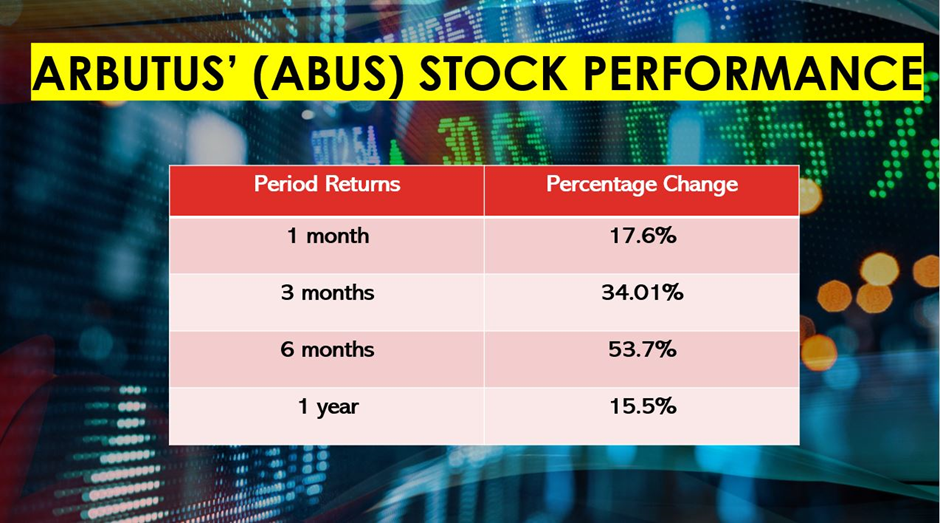 Moderna claims that LNPs are not patentable. However, the company had previously licensed them from Arbutus for other uses.

It is believed that Moderna is reportedly claiming this as Arbutus is closer to collecting royalties for the COVID-19 vaccine, and it could get a considerable amount.

As Moderna's vaccines are widespread across the world, and the authorities look in favour of Arbutus, investors could be giving attention to the stock due to this reason.

The ABUS stock has surged about 30 per cent year-to-date (YTD) and expanded by 45.5 per cent in the last seven days. However, on December 1, the stock was trading 21 per cent lower in comparison to the 52-week high of US$ 5.87 per share.

If the stock continues the present momentum, ABUS could soar higher. It is already up by around 90 per cent in comparison to the 52-week low of US$ 2.43 apiece.

Also Read: 3 Canadian healthcare stocks to keep on your radar