Psychedelic drugs are well known for alleviating depression and mental disorders. Some researchers, patients, and investors believe that the medical benefits of psychedelics are better than any modern antidepressants to treat mental distress.

The global psychedelic sector has high growth potential, considering the growing concerns about depression and mental disorders worldwide. Research suggests that the industry may compound annually by more than 16 per cent from the current market size to $ 6.85 billion by 2027.

On that note, let us explore some of the Canadian psychedelic stocks. 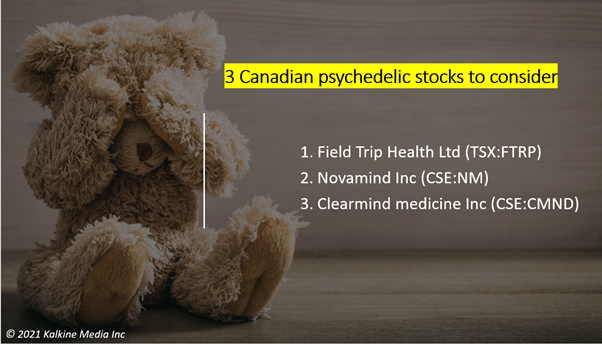 The global psychedelic therapy developer Field Trip Health Ltd noted its stock down by 1.849 per cent at market close on Thursday, October 21 to C$ 6.90 apiece. It had slumped by more than 30 per cent from the 52-week high of C$ 9.88 reached on February 11. 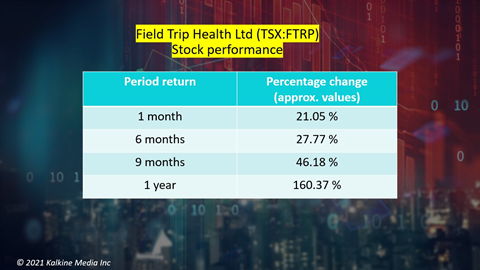 The plant-based psychedelic stock posted a day high of C$ 7.11 during the recent trading session. It climbed more than 160 per cent in the past year and rose by about 65 per cent year-to-date (YTD). It dropped by approximately seven per cent in the last three months. However, it improved in the previous month and soared by about 21 per cent.

The company continued to gain momentum in the mental health field by opening three new psychedelic clinics in North America, an announcement on Tuesday, October 19 said.

The ketamine-powered psychotherapist Novamind Inc witnessed its stock closing at C$ 0.95 per share, up by 21.795 per cent on October 21.

The NM stock decreased by almost 39 per cent in the last nine months and nearly eight per cent in the previous three months. However, it seems to be recovering as it marked a quarter-to-date (QTD) growth of almost 44 per cent and spiked by more than 58 per cent in the past month.

From the valuation point of view, the Toronto-headquartered company held a price-to-book (P/B) ratio of 4.333 at the time of writing.

As anxiety, depression, and post-traumatic stress disorder (PTSD) cases are rising, the psychedelic industry is expected to see a boost worldwide, especially in Canada as there are many new entrants in the emerging sector. As a result, investors are often looking into these psychedelic stocks as these are likely to gain momentum in future.

However, investors should rely on fundamentally strong stocks that hold the potential to grow with forthcoming market opportunities and should understand their risk-return profiles.