In a first, the US Treasury Department announced that it will sanction a cryptocurrency exchange over allegations that it was involved in laundering ransoms for cyberattacks. The move comes after a series of cyberattacks in the US that crippled government agencies and industries.

According to the Treasury, ransomware payments amounted to US$ 400 million in 2020. Ransomware is a type of malware that shuts down access to key programs and hackers demand ransom, usually in the form of cryptocurrencies, to unlock them.

The Office of Foreign Assets Control (OFAC) will put the Russia-based Suex in the list of specially designated nationals (SDNs) for facilitating cryptocurrency transactions for cyberattacks.

What's next for Suex?

As the cryptocurrency exchange has been put on the SDN List, it will become almost impossible for Suex to do business with US entities. Generally, US citizens are not allowed to perform transactions with sanctioned entities. If they do so, the citizens may face enforcement actions or sanctions.

Also Read: A Canadian cybersecurity stock to buy for the long haul

In Suex's case, the Treasury has alleged that it facilitated transactions for its illicit gains and during the investigations, it was found that 40 per cent of Suex's transactions were associated with illicit actors. 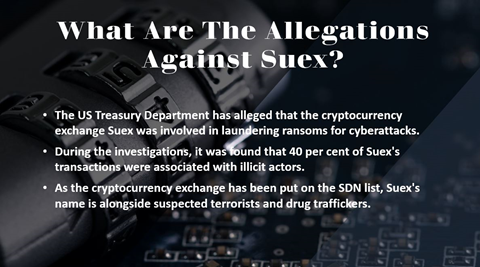 The US Treasury's guidance for businesses

While taking action against Suex, the Treasury urged the cyberattack victims and related companies to report all forms of virtual attacks as soon as they happen and cooperate with the law enforcement agencies.

The department appealed to the companies and individuals to not make payments to cyber-attackers. The advisory states that the US entities could be punished for making payments to illicit actors.

Tackling ransomware attacks is the government's top priority as the Joe Biden administration has identified these attacks as a tool to disrupt government or private operations. The US government reportedly believes that the ransomware attacks are no longer limited to extortion cartels and could be full-fledged sponsored attacks by enemy states.