Let us explore these five TSX financial stocks that offer dividends and could support investors in the long run.

Manulife is a C$ 43-billion market cap life insurer and wealth manager, which recently was recognized among the Best 50 Corporate Citizens in Canada by Corporate Knights.

Manulife reported a significant increase in profitability with a net bottom line of C$ 2.97 billion in Q1 2022 compared to C$ 783 million in Q1 2021. The financial service company saw its stock slip by almost 19 per cent from a 52-week high of C$ 28.09 (February 10). As per Refinitiv findings, MFC stock had a Relative Strength Index (RSI) of 52.4 on July 8, representing a moderate market condition.

Intact Financial said its net operating profit per share swelled by 13 per cent year-over-year (YoY) to C$ 2.7 in Q1 2022, resulting from the accretion of the RSA acquisition and growth in distribution income.

IFC stock spiked by over 14 per cent in six months. As per to Refinitiv, Intact held an RSI of 67.65 on July 8, nearing the overbought mark of 70.

Bank of Montreal, also known as BMO for short, is set to deliver C$ 1.39 per share as a quarterly dividend on August 26.

BMO stock plunged by nearly 13 per cent in three months. As per to Refinitiv, BMO gained some momentum with a rising RSI of 44.82 on July 8. 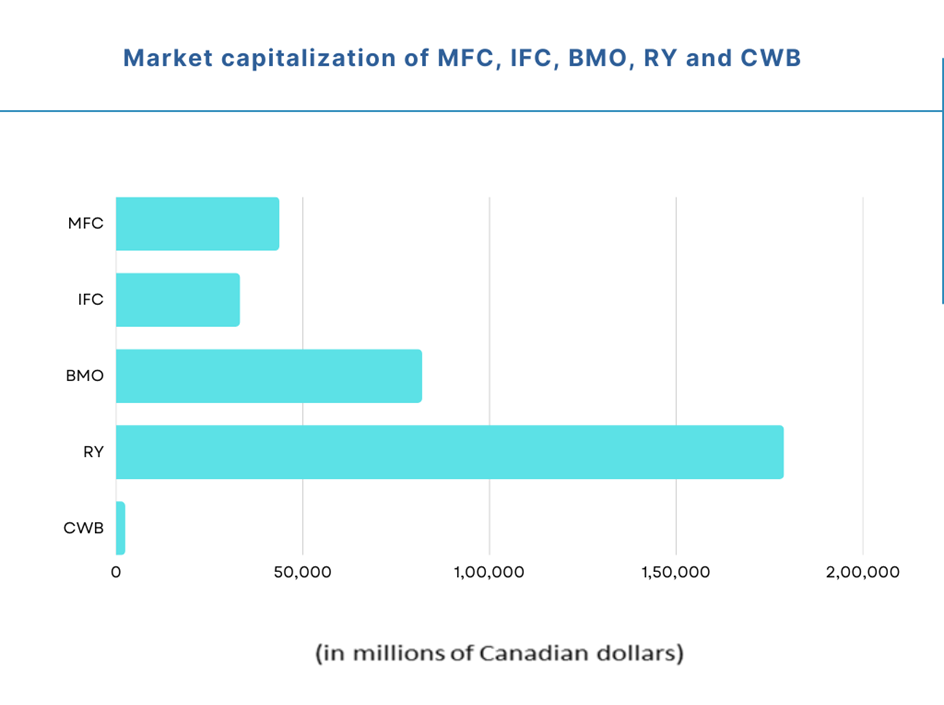 Royal Bank signed a new data access agreement with Plaid to boost client security and enable RBC clients to expand their connection to financial service apps. The top lender in Canada is scheduled for a quarterly dividend of C$ 1.28, to be paid on August 24.

RY stock plummeted by about 10 per cent in six months. As per Refinitiv, Royal Bank saw some momentum with an RSI of 52.47 on July 8.

Canadian Western Bank posted revenue of C$ 259 million in Q2 2022, reflecting a YoY surge of five per cent. The mid-cap lender (market capitalization exceeding C$ 2.37 billion) had a dividend yield of almost five per cent (annual dividend amount disbursed by the company expressed as a percentage of its stock price).

CWB stock slid by almost 23 per cent in a year. As per Refinitiv, CWB held an RSI of 35.57 on July 8, slightly up from the oversold territory of 30.