What does Tesla do in Canada?

In November, Tesla opened an electric vehicle (EV) battery manufacturing equipment plant in Markham, Ontario. This is one of the ways in which the company founded in the US, is expanding its presence in Canada.

This came after it was widely noted in September, that the car producer, which had no manufacturing units in Canada, was the biggest recipient of the country’s green vehicle subsidies. Tesla netted C$125 million over two years. The city of Ottawa awarded the company C$118.6 million in EV rebates and the Department of Natural Resources paid it C$6 million for the installation of 156 charging stations.

Electric vehicles bought in Canada for under C$55,000 qualify for a C$5,000 rebate, however, so much of it going to a company with no production units in the country, raised the question about how encouraging these subsidies really are. That assumes, that Tesla owners would have likely bought the car, rebate or not.

Nonetheless, the automaker now has an equipment manufacturing unit in the country, but these expansion plans have been in the works much longer than the September report. In 2019, Tesla acquired Hibar, a manufacturer whose pumps are required for high-speed battery assembly. Tesla is looking to scale up the production of 4680 cells and this latest expansion could certainly achieve that by making machines that make batteries.

Tesla also released a video that shed light on its teams in Canada, including research and development, charging and manufacturing teams. Visibly, Tesla has sought to show it holds its partnership with the country to be an important one and it's not all about China and Germany for the company.

It bears mentioning that Mr. Elon Musk was born a Canadian citizen by virtue of his mother Maye Musk being a Canadian (you may remember her from when she joined him to host ‘Saturday Night Live’). 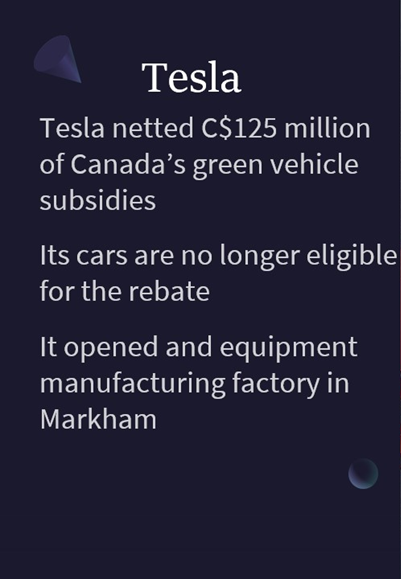 When Prime Minister Justin Trudeau met with President Joe Biden for the Three Amigos Summit in November, there were certainly words to be had about EV manufacturing. Mr. Biden himself is noticeably an EV fan, remember the president test driving that electric Hummer? His manufacturing policies, however, have been described by some as protectionist.

Meanwhile, after the said summit, in early December, it was revealed Tesla will not again be the biggest beneficiary of Canada’s green vehicle subsidies after Transport Canada announced the company’s cars are no longer eligible for the rebate.