It thus may be fair to say that the energy sector has performed decently so far in 2022. However, the Canada stock market, like other stock markets around the world, seems to have hit a bearish phase, the benchmark TSX Composite having lost 5.15 per cent in April.

Amid this volatile market, let’s look at some TSXV energy stocks.

Leucrotta’s stock closed Friday, April 29, at C$2.01. The stock has been on a rally over the last year.

OYL closed Friday at C$1.60. On March 10, CGX said it had received a US$35 million loan from Frontera Energy Corporation, which is listed on the TSX.

On that day, the trade volume of the OYL stock rocketed and its price gained about 10 per cent.

URC closed at C$4.25 Friday. It has gained 19 per cent in nine months and about eight per cent in three months.

URC is down seven per cent on a YTD basis and is currently trading 42 per cent below its one-year high of C$7.31 seen in October 2021.

EU closed Friday at C$1.41. The last time the stock was in a similar kind of price range (slightly lower), it rebounded.

The stock has gained over the last 12 months but is down 21 per cent YTD. It is currently 38 per cent below its one-year high of C$2.27 that came in September last year. 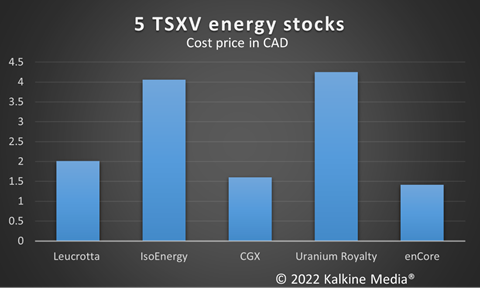 As seen in the above graphic, all these stocks trade under C$5. The TSXV energy sector has seen gains this year. With the Russia-Ukraine war continuing both Canadian oil and gas stocks and Canadian uranium stocks may stand to gain.