TOU and L: 2 TSX stocks to buy as Canada's inflation soars 7.7% in May

Canadians are rapidly facing high-cost pressure, as is pointed out by Statistics Canada's latest report noting that the country's Consumer Price Index (CPI) rose by 7.7 per cent in May 2022, the highest annual growth rise since January 1983. Amid this investors concerned about rising inflation could explore Canadian stocks like Loblaw (TSX: L) and Tourmaline Oil (TOU) to seek some stability.

So, let us look at these two TSX equities that could help absorb some inflation shocks.

As grocery prices remained high, Canadians reportedly paid 9.7 per cent more for food at stores in May this year than in May 2021, notes the StatCan report. Hence, exploring one of Canada’s biggest grocery retail companies could mitigate the inflationary impact as Loblaw projects its sales to benefit from ‘industry-wide’ inflation in the first two quarters of 2022.

Loblaw increased its revenue by 3.3 per cent and reported a net profit jump of 39.6 per cent in Q1 2022 relative to Q1 2021. The grocery company, which also owns and manages pharmacy stores, anticipates its retail earnings to increase faster than sales.

L stock grew by about 47 per cent in 52 weeks. According to Refinitiv findings, Loblaw saw a sharp increase in its stock prices in March and continued its upward trajectory clocking a 52-week high of C$ 119.58 on April 28. Loblaw stock appears to be on a consolidated trend with a Relative Strength Index (RSI) of 43.34 on June 22. 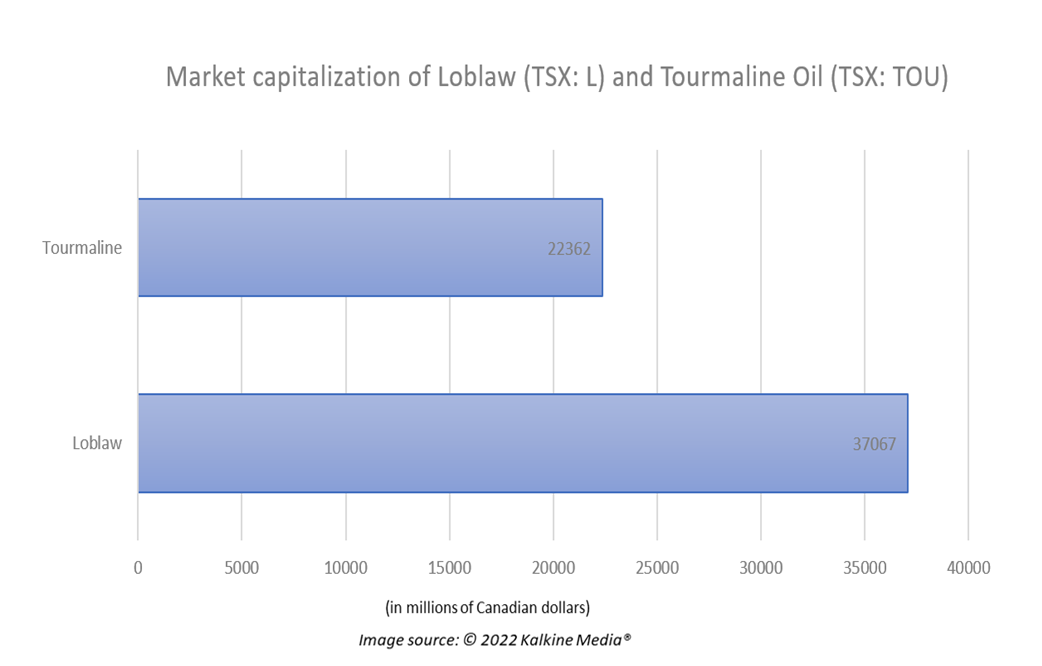 The StatCan report found that energy prices rocketed by 34.8 per cent, with consumers paying 48 per cent more for gasoline in May this year compared to last year. Considering this surge, investors may look for TSX oil and gas stocks like Tourmaline, which offer exposure to high energy prices (particularly crude oil).

Tourmaline reported a year-over-year (YoY) rise of 70 per cent in its total revenue to C$ 1.71 billion in Q1 2022. The oil and natural gas company also posted a significant surge of 71 per cent in its cash flows to C$ 1.07 billion in the latest quarter compared to the first quarter of 2021.

TOU stock swelled by almost 120 per cent in one year. According to data from Refinitiv, TOU’s RSI was 37.98 on June 22, slightly up from the oversold territory.