The Canadian benchmark index dwindled by less than a point to settle at 20,230.96 on Wednesday, after touching an intraday high of 20,295.18.

While the energy index traded 1.37% lower, base metals declined 1.3% and industrials slipped 0.8%. The losses were offset to a certain extent by gains in the high weightage financials sector, which was up 0.56%. 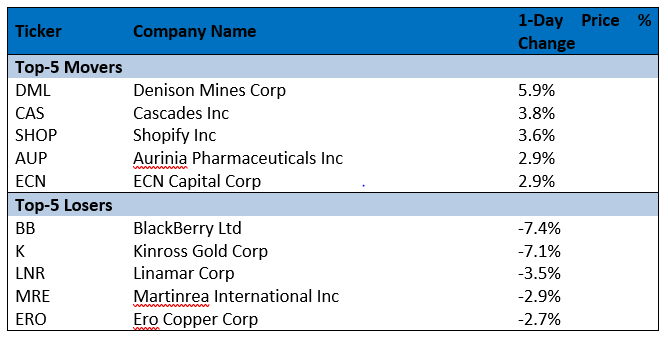 Wall Street noted a weakness on Wednesday in the wake of the US Federal Reserve's recent economic predictions, which foresee an interest rate hike in 2023. Stocks ended the day's trading session largely down, reflecting a negative reaction to the Federal Reserve's highly anticipated monetary policy decision.

US Dollar Index inched higher on Wednesday after Federal Reserve chair Jerome Powell announced that there will be two potential rate hikes by 2023. The US dollar index settled 0.78% higher against the basket of majors.

The Canadian Dollar, on the other hand, traded lower against the US counterpart, down 0.79%.