Sharethrough Inc, a Canadian omnichannel and omniformat advertisement exchange, is all set to enter the world of stock trading via the traditional route of an initial public offering (IPO).

Based in Montreal, Canada, the enterprise claims to be a leader in the field of advertising technology, with a focus on bringing human-centric tech innovation to real-time programmatic advertising. Its operations are said to span across Canada and the United States.

Let us take a closer look at Sharethrough’s IPO plans.

Also read: WeWork SPAC merger complete! What to know before investing in WE stock?

Sharethrough Inc announced its plans to go public earlier this month. In a statement released on October 4, the firm said that it has submitted its preliminary long-form prospectus with the securities regulatory authorities in Canada.

Last week, the company elaborated on its amended IPO plans saying that it aims to offer about 3.94 million to five million treasury common shares at its IPO for a price range of C$ 15 to C$ 19 apiece. 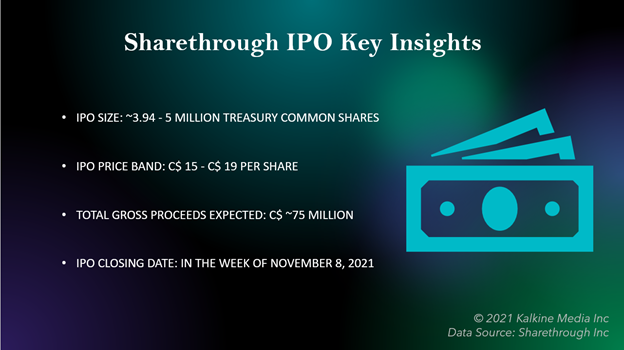 Going by the lower end of the price band,  Sharethrough is expected rake in total gross proceeds of about C$ 75 million from its IPO.

Sharethrough added that in case its over-allotment option is fully applied, where its treasury common shares offered would be between 4.53 million to 5.75 million, its total gross proceeds is expected to be about C$ 86.25 million.

Sharethrough’s IPO is set to be managed by a consortium of underwriters, with RBC Capital Markets, National Bank Financial Inc and Bank of Nova Scotia in the lead as joint bookrunners.

The Montreal-headquartered firm plans to wrap up its IPO in the week of November 8, 2021. If its IPO goes as planned and the company’s common shares are approved for a public listing, Sharethrough is expected go up on the Toronto Stock Exchange (TSX).

Sharethrough Inc, as we know it today, came into being after Montreal-based District M Inc and Sharethrough USA merged in March 2021 to form one of the world’s biggest independent omnichannel and omniformat ad exchanges.

Sharethrough said that it aims to use about C$ 28.4 million of the net proceeds raised from the IPO for payroll withholding tax purposes, while the rest of it will be utilized to bolster its financial position, working capital requirements and for its growth strategy. The company added that it does not plan to use the capital from its IPO to pay off any indebtedness as of now.

Investors interested in Sharethrough Inc could explore its stocks if and when they crop up on the TSX following its IPO.