Cooper's Hawk Winery & Restaurants is reportedly looking to go public in the US equities market, which could happen sometime this year.

1. At the time of the initial public offering, Cooper's Hawk Winery & Restaurants could seek a valuation of US$ 1 billion, and it is reportedly in touch with Piper Sandler Cos. and Bank of America Corp. for the IPO, among others.

2. Cooper's Hawk Winery & Restaurants was established in 2005, and ever since then, the casual-dining chain has expanded its presence. It serves at over 45 locations in the US. 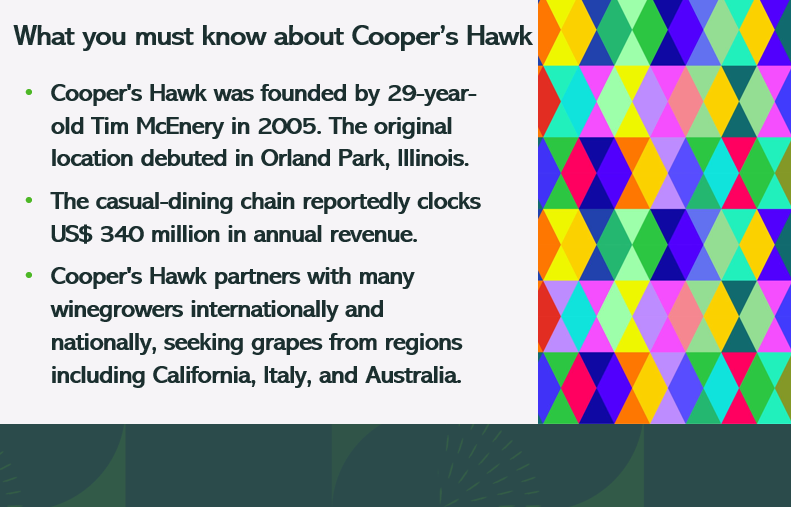 3. Cooper's Hawk Winery & Restaurants offers its customers to join its wine club for customer engagement. It allows the club members to discover a new wine every month.

4. According to reports, the wine club has approximately 350,000 members, and the membership is expanding at an annual rate of 25 per cent.

5. Cooper's Hawk Winery & Restaurants could consider an IPO as the gross proceeds often helps a company support its expansion plans. The company is reportedly looking to open seven new restaurants by 2024, and an IPO can help secure funds.

2021 was a hot year for IPOs, and 2022 could be another active year. According to an Ernst & Young report, around 2,388 companies went public globally.

In the US equities market, many restaurant chains went public in 2021, and Cooper's Hawk Winery & Restaurants could kickstart the IPOs in 2022.

To buy Cooper's Hawk stock, interested investors will have to wait for the company to file documents with regulatory authorities and get approval.

Since 2015, at least five restaurants like Dutch Bros, Krispy Kreme, and Sweetgreen, among others became publicly traded companies in 2021.