The other critical factors to watch out were:

Given the above-market developments, we will discuss two consumer staples stocks - Cranswick PLC (LON: CWK) & Hilton Food Group PLC (LON: HFG). As on 23rd June 2020, (before the market close at 9:53 AM GMT+1), both CWK and HFG stocks were up by 3.97 per cent and 1.72 per cent, respectively. It is mindful to note that both companies have maintained their final dividend amid this period of uncertainty. Let us walk through their financial and operational performance to understand the stock better.

Cranswick PLC is a UK based manufacturer and supplier of food products to grocery retailers. It operates 16 manufacturing facilities, two animal feed mills and five farming businesses which produces products such as Fresh Pork, Convenience, Gourmet Products and Poultry. The Company is listed on FTSE-250.

The Company reported revenue of GBP 1,667.2 million, which was up by 16 per cent year on year. The like for like revenue was GBP 1,623.8 million after removing the impact of GBP 42 million for Katsouris Brothers which was acquired in H1 FY20 and GBP 1 million for Packington Pork and White Rose Farms in H2 FY20. The adjusted operating revenue was GBP 105.1 million, and adjusted operating margin was 6.3 per cent.

The Board proposed a final dividend of 43.7 pence for FY20, subject to shareholders approval it will be paid on 4th September 2020. In April, it declared a bonus of GBP 500 to each of its site-based co-workers who will be paid at the end of June.

At the end of March, the net debt was GBP 146.9 million, including GBP 65.9 million of IFRS 16 lease liabilities. The Company has an unsecured credit facility of GBP 160 million till November 2023. Given the balance sheet headroom and stable cash flows, the Company did not seek any Government-backed assistance. Further, the Cranswick invested a total of GBP 101 million in FY20.

Category and Channel Sales in FY20

In FY20, the fresh pork sales were driven by robust export and wholesale demand; and the convenience was bolstered by the acquisition of Katsouris with growing demand in the continental meat business. New customer wins, and gourmet pastry drove gourmet category growth. 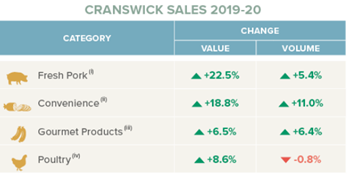 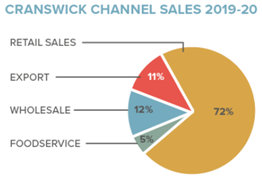 1-Year Chart as at June-23-2020, before the market close (Source: Refinitiv, Thomson Reuters)

The Company believes the domestic food sector to be resilient. It considers the investment in robotics, automation and refrigeration system upgrade will translate to better performance. The Company has suggested that it will be able to continue operations, meet its liabilities and intends to do a capital expenditure of GBP 60 million in FY21. The in-depth knowledge of the market will enable the Company to control supply as per the demand needs.

The Company reported revenue (excluding IFRS 16) of GBP 1,814 million for FY19 and grew by 11.0 per cent on constant currency year on year. The sales were primarily driven by growth in sales volume. The sales volume was 371,715 tonnes and were up by 7.8 per cent. The Western Europe segment generated revenue of GBP 1,634 million, whereas Central Europe and Australasia reported revenue of GBP 91.2 million and GBP 89.8 million, respectively. The Company made an operating profit of GBP 55.8 million and a net profit of GBP 35.2 million.

As on 29th December 2020, the Company had a cash balance of GBP 110.5 million and undrawn committed loan facility of GBP 116.0 million. The net debt, including the impact of IFRS 16 was GBP 271.5 million, which includes lease liabilities of GBP 183.0 million. The Board has proposed a final dividend of 15.4 pence per share for FY19 payable on 26th June 2020 to shareholders. On 1st April 2020, the Group appointed Rebecca Shelley as an Independent Non-Executive Director

The revenue grew by 10 per cent year on year mainly driven by growth in sales volume. The adjusted operating margin was 3 per cent the same as last year. The adjusted profit per kilogram processed and sold in pence was 14.7 pence per kg. The gearing ratio was 108.4 per cent. The sales volume grew by 7.8 per cent underpinned by investments in new vegetarian, slow cooking food ventures and a new facility set up in Australia. Employee and labour agency costs were 51.8 pence per kg due to a wide range of product offerings.

The Company witnessed increased demand during the lock-down. The business was upbeat in Westen Europe due to higher red meat purchases during lock-down and 100 per cent supply of red meat to Tesco in the UK. The Company also experienced growth in Eastern Europe driven by the demand for red meat and fresh food supply. The Hilton Seafood sale increased in the UK as consumers shifted from counter food to packed food. The commissioning of meat and the fish plant in New Zealand has been delayed due to lock-down measures.

1-Year Chart as at June-23-2020, before the market close (Source: Refinitiv, Thomson Reuters)

Short to medium-term growth of the business will be supported by new facilities opening in New Zealand and Belgium in 2020. The Company is expanding its business to Belgium, and it is opening a new facility in September 2020. It has partnered with Ahold Delhaize to supply packed red meat to their stores from 1st September 2020. It is expanding its footprints in seafood and vegetarian products. The Company believes it is well equipped to face the COVID-19 impact due to its local operating model; however, the uncertainty over Brexit negotiation will be challenging.