The Montney Formation: Is Calima Energy Sitting in the Catbird Seat?

Calima Energy Limited (ASX:CE1) is an oil & gas entity headquartered in Australia, which holds over 63,000 acres of drilling rights across the Montney Formation in BC (British Columbia). The Company has established a material position in the Montney Formation, which contends favourably with the best of the United States’ resource plays. 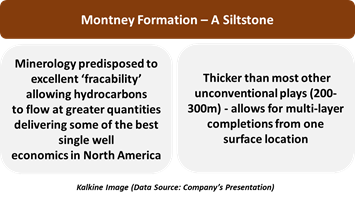 In addition to the Calima Lands in Montney Formation, the Company now possesses Tommy Lakes asset in Canada. The Company has lately achieved a considerable milestone with a resource upgrade at its Montney asset subsequent to an updated independent resource evaluation by McDaniel & Associates.

The Company seems to be in a favourable position, as evident from the following developments:

The macro headwinds seem to be shifting in favour of the Canadian oil & gas market, with gas storage now at a 10-year low level reaching C$2.50 mcf on AECO in May 2020. 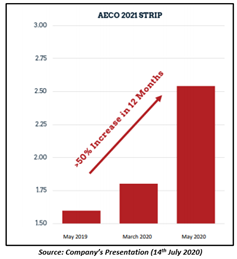 In addition to gas storage, the Canadian gas market has also improved relative to 2018/19 in terms of the following factors:

Calima not only holds large contingent resources (1,178 PJe / 1.15 TCFe), it also has an upper hand in terms of long-life licences and low-maintenance assets. With development pad and pipeline already permitted, there seems to be no regulatory or environmental hurdles in its way.

Pipeline approval received by the Company in December 2019 has shifted Calima Lands to being development ready from a regulatory perspective. Besides, acquisition of Tommy Lakes Facilities has elevated 248.9 bcf gas and 12.4 mmbbl oil to the highest Contingent Resource or Development pending category, which can be classified as 2P Reserves on securing funding.

The egress capacity seems to be improving near the Montney area, as Alberta Government has recently funded USD 1.1 billion and offered support by financing USD 4.2 billion of the construction of the Keystone XL pipeline managed by TC Energy.

Besides, Coastal Gas Link Pipeline construction is continuing with all Federal and Provincial government contracts reached with Hereditary Chiefs. Trans Mountain pipeline is also under construction following the purchase by the Federal Government for C$4.5 billion, with proposed spending for expansion being C$3.6 billion.

Notably, more than 8.2 bcf/d of demand projects are under development in Canada, incorporating Canada LNG.

The Montney region witnessed some significant acquisitions this year, indicating progress towards consolidation of acreage positions around the area.

Tourmaline Oil Corporation acquired Painted Pony acreage, Polar Star and Chinook Montney rights for AU$90 million. Calima considers this as a logical move in advance of an expected rise in demand for LNG feedstock in Canada and growing pipeline capacity.

As at 30th April 2020, Calima had AU$3.6 million in working capital. The Company expects its working capital position to support its business until early 2022. After over AU$1 million of reductions in operating costs, the Company observes its cash burn at AU$158k per month. 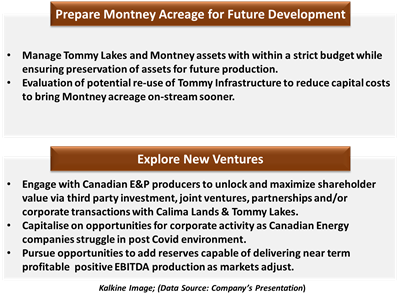 Calima is also continuing informal discussions with some firms concerning combination transactions and examining those that are value accretive with cash flow.