China- The Catalyst to Gold and Iron Ore Rally

Gold and iron ore have been the best-performing commodities so far with prices of gold spot trading near its seven-year high at USD 1,818.13 per ounce and prices of Iron Ore Futures on the Dalian Commodity Exchange (or DCE) trading near its new 52-week high of RMB 845.00 per dry metric tonne.

The surge in both commodities has provided an impetus to ASX-listed gold and ASX-listed iron ore stocks, which are now emerging as the top performers in the metal and mining space.

To Know More, Do Read: Commodity Stocks Making Their Way To The Top

Amidst the market turmoil, the gold market has witnessed a lot of cash inflow through gold-backed ETFs and aggressive purchasing of many central banks across the globe, to hedge their position against the market beta and dollar rush, respectively.

One thing which is now common behind the rush in prices of both commodities is the demand from China.

While gold had witnessed a rally over the market fear, until now, many industry experts now believe that the further rally would gather steam from the retail sector, especially from China, thanks to its early lockdown and an early lifting of lockdown.

To Know More, Do Read: Australia is Day Trading and How! Market Activity Jumps Multifold:  Time to Grease your wheels

Furthermore, the surge in gold prices has taken a toll on the retail demand as well, which, however, now seems to be a new normal, and many large investment banks such as Goldman Sachs anticipates that gold prices could average as high as USD 2,000 per ounce by next year, and the retail demand from China and India could act as a major factor to aid price surge.

However, the retail demand is now expected by various investment banks to surge in China, which could further boost the gold rally over the coming years.

Likewise, iron ore prices are now depending upon the demand from China.

China is charging its steel output- first to capture a large tranche of the global steel industry, and secondly to provide an impetus to its post-COVID-19 economy.

To Know More, Do Read: China Poised to Grab the Global Steel Trade as Economies Open up for Trade 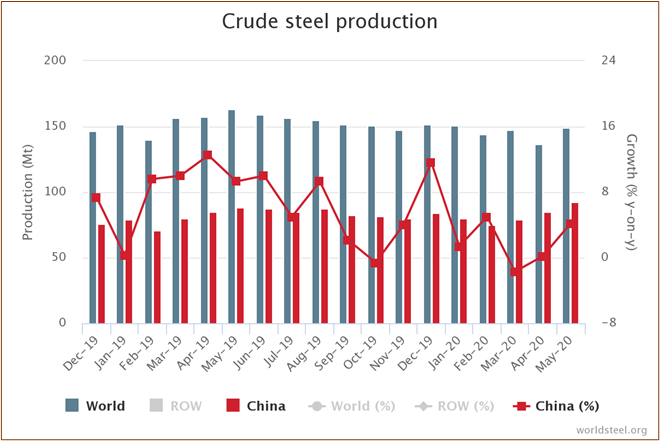 The higher steel production in China is now calling for iron ore; thus, despite witnessing a slight recovery in the supply chain, the commodity is gushing forward on the international front.

Furthermore, the World Steel Association anticipates that the steel demand across China would be more visible in the second half of 2020, driven by construction, especially infrastructure investment, as the government has put forward several new infrastructure initiatives, which could further support the demand for iron ore.

In a nutshell, both the top-performing commodities on the international front are somehow tracing back to China, and the revival of the nation could further propel these commodities. However, it is not without risk as the red dragons are currently dealing with the issue of the second wave of COVID-19 infection, leading to the slowing down of daily activities across many provinces, which if fuelled further, could put a lid on gains of both the commodities.