The ASX-listed mineral explorer Renegade Exploration Limited (ASX:RNX) has published the assay results from its recent drilling operation on the Lady Agnes prospect in North Isa Project. The campaign intersected significant copper and gold intercepts on the prospect.

Renegade carried out a maiden five-hole RC drilling campaign for a total depth of 1,234m over Lady Agnes. The drilling program was designed to test the formations underneath the historical Lady Agnes Mines and for follow-up on legacy work. 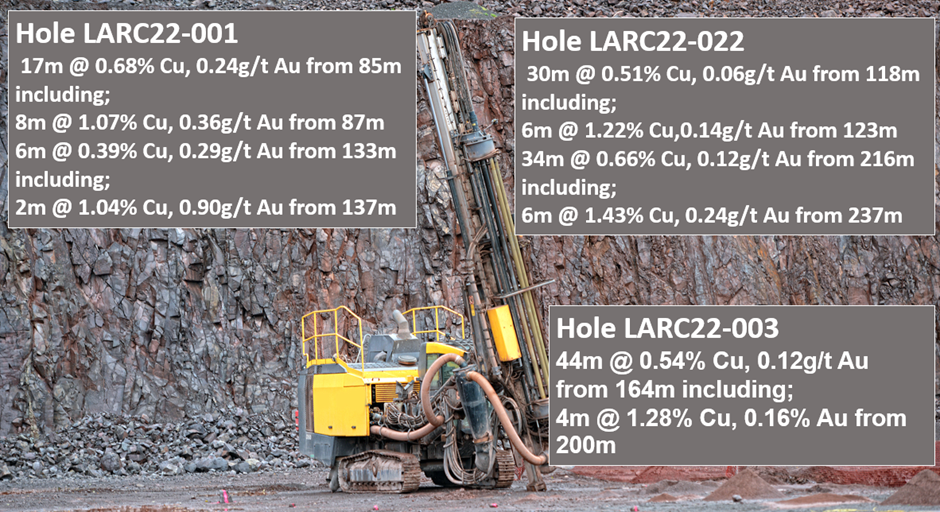 Further, those broad zones of mineralisation are open to the south along the Eastern Creek Volcanic (ECV) contact, at depth and to the east of the contact.

Encouraged by the latest assay results, RNX has sent back the key 44m section from LARC22 – 003 to the laboratory for analysis on a 1m basis. The initial lab test was conducted on 4m composite samples.

The assay results strongly indicate the presence of sulphide mineralisation in at least two broad good grade envelopes with high-grade zones. Also, the drilling results confirmed that mineralisation is open to the south along the Eastern Creek Volcanic contact, at depth and to the east of the contact zone. 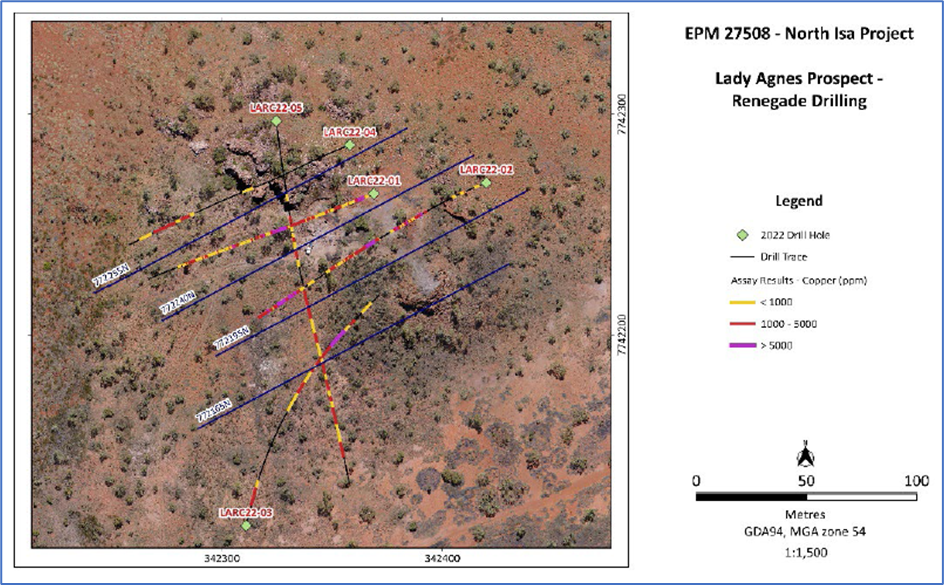 Renegade's recent drilling operations included making use of past conclusions from Mr Isa Mines’ work. This explains why the company undertook drilling underneath the old Lady Agnes shaft and into the ECV unit from south to north. Four drill holes encountered significant copper suphide mineralisation, some of which had gold credits.

RNX is planning to carry out a gravity survey of the area and a downhole EM survey on LARC22-02, and it was cased to undertake the same.

The huge silica-quartz cap on Lady Agnes is interpreted to have occurred later than copper sulphides. Furthermore, the silica-quartz cap has shielded the surface oxides and has drawn explorers’ interest to the area. It is believed that the Lady Agnes oxides have acted as a distraction to the general exploration of the area.

The downhole EM is expected to "light up" the area around Lady Agnes for potentially 200–400m both laterally and to depth. The gravity survey will aid in structural characterisation and may generate targets.

Mineralisation in the historical hole LAG1 starts from the depth of 273m and intersects a broad zone of copper within a breccia-style structure. This structure is common mineralisation hosts in the area. RNX’s drilling program was designed to test the sulphide mineralisation from a depth range of 75m to 150m above the deeper big zone of mineralisation intersected in LAG1.

The company believes that there is potential for further copper mineralisation within the existing main alteration zone consistent with the current IP anomaly and also outside of it. To confirm this, the company is planning follow-up geophysical studies to generate targets for the next round of drilling.

Lady Agnes prospect is located at the flexure of Paroo thrust, which separates ECV and Mt Isa Group sediments. Historical mining was concentrated on higher-grade oxide resources. The most recent works (1960-2000) involved drilling and geophysical studies.

Renegade secures 30% interest in the project

Renegade informed that post the drilling campaign, the company has now formalised the joint venture agreement with Burke Copper for the North Isa Project. Under the terms of the agreement, RNX has earned 30% interest in the JV and will take the lead on all future exploration and development work on the project.