An Australian-headquartered exploration company, Parkway Minerals NL (ASX: PWN) focusses on the development of large greensand deposits in WA’s Perth Basin. The purpose of the company is to define a significant resource base and identify how potash, phosphate and other minerals can be recovered from the Dandaragan Trough most effectively.

Phosphate and potash are the key elements that are used in the production of commercial fertilisers, and there are no substitutes available for these elements. The increased demand for these elements due to the current growth in population and accompanying growth in global food demand presents a considerable opportunity for Parkway Minerals.

The strategy of the company is targeted towards the establishment of Parkway as the largest supplier of fertilisers in Australia. To achieve the objective, there are multiple sub-strategies including consolidating prospective ground in WA, reducing competing market interests, proving efficiency, extraction and cost profile, dominating the Australian glauconite resource position and advancing towards bankable feasibility.

Parkway has two fertiliser projects in WA - at Lake Seabrook and within the Dandaragan Trough. The company aims to extract essential fertilizer feedstocks, potash and phosphate from the two projects. At Lake Seabrook, the company is looking at the potential of the lake to host economic deposits of SOP (sulphate of potash). However, there are extensive phosphate and potash minerals existing in greensand deposits within the Dandaragan Trough.

Let us have a quick look at each of company’s projects below:

The project consists of five exploration licences that cover a Salt Lake near Koolyanobbing iron ore mining area, bestriding the Perth to Kalgoorlie rail-line. The project is located at around 80 km to the north east of Southern Cross and 450 km to the northeast of Perth in the Yilgarn region of Western Australia.

Recently, the company announced the results of its initial water sampling program carried out by a field crew at its wholly owned Lake Seabrook Potash Brine Project. Parkway informed that the potassium samples ranging from 1012 mg/l to 4209mg/l were returned from the near surface water samples. The company received encouraging results from three brine samples collected from the central part of the lake system that returned potassium concentrations of 4209 mg/l, 2616mg/l and 2521 mg/l.

Parkway has only completed sampling over around half of the project area and plans to complete the surface sampling further on the remaining parts of the project area. The company also intends to conduct ground seismic surveys to determine paleochannels to drill test. 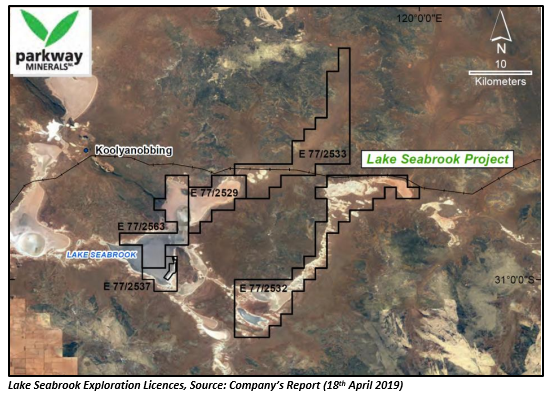 The company holds 100 per cent of the Dinner Hill Potash and Phosphate Deposit within the Dandaragan Trough Project. The project is located at around 200 km to the north of Perth in Western Australia and is well situated with close access to power, rail and gas. The Dinner Hill Project covers over 100 sq. km area within the DTP. The sedimentary rocks within the Dandaragan trough contain glauconite, phosphate nodules and a potash rich mica. The company aims to produce sulphate and phosphate of potash fertilisers and multiple valuable by-products from the existing glauconite and phosphate within the sediments of the trough.

Parkway has identified significant JORC 2012 resources of phosphate and potash at the Dinner Hill Deposit and the substantial exploration target at Dambadgee Prospect, both of which are suitable to apply the K –Max process. The K-Max process flowsheet is the product of comprehensive testwork by the company and its technical consultants, Strategic Metallurgy.

In a recent announcement on the ASX, Parkway announced that IP Australia has given the company the Deed of Letters Patent No 2015349594, that recognizes the innovation of the K-Max process for the extraction of potassium from a wide range of minerals. According to Parkway, this is a significant step in the commercialisation of Dandaragan Trough and application of technology to the other deposits. A successful commercial outcome will allow Parkway to turn into a major contributor to the phosphate and potash markets during the time of inflated regional demand.

The company is looking forward to pilot plant testwork to validate the process on an industrial scale from both Dinner Hill and Dambadgee. The company intends to conduct a prefeasibility study from the process data, which will confirm the financial metrics of a project using K-Max to produce both potash and phosphate fertilisers. 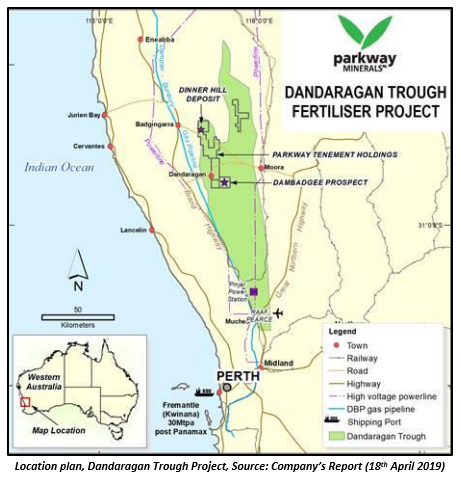 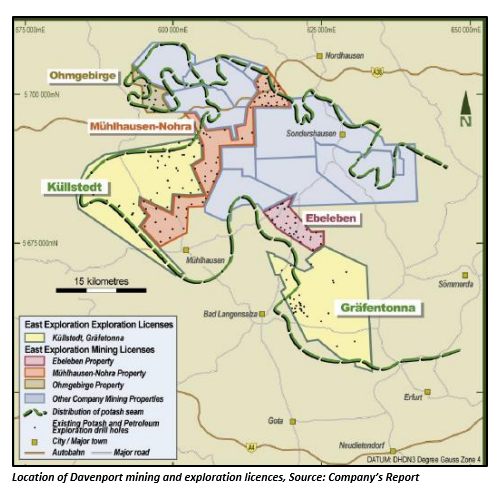 Parkway released its half-year financial report for the period ending 31st December 2018 in March this year. The company reported a total income of $144,820 and from continuing operations and total comprehensive loss of $903,016 for the period. Parkway’s cash and cash equivalents at the end of the period amounted to $407,517. However, at 31st March 2019, the company had $0.38 million cash and $0.56 million liquid assets.

The company’s stock is currently trading at AUD 0.006 by the end of trading session on 18th July 2019. The stock has delivered a return of 20 per cent on a YTD basis and a 50 per cent return during the last one month.