After conducting the Phase III drilling program from October to November 2019, the company has now finally revealed the results of the drill holes.

Encouragingly, the results have returned robust intersections and have provided extensions to current mineralisation and confirmed the possibility of a new zone of shallow mineralization. 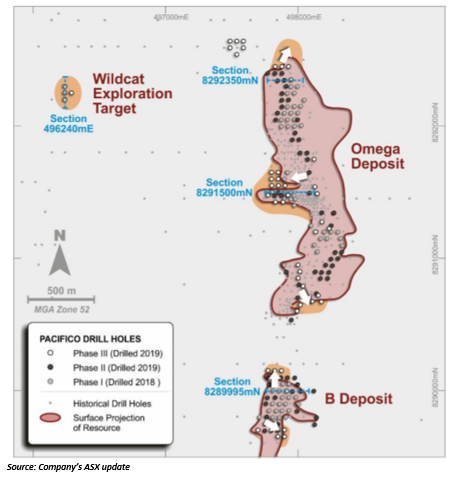 With regards to Omega deposit, the logging and analysis results from Phase III have returned intersections which support the estimated grades and targeted mineralisation geometry at the Omega deposit. The results have also confirmed the geological continuity of the mineralization.

Strong intercepts were returned from the peripheries of the mineralisation at shallow depth and down dip and support further step-out drilling.

Notably, the intercept in SH_PD_A-31 intersected high-grade mineralisation including one of the highest silver grades recorded at Sorby hills with 383 g/t Ag over 10m. This area is now a high priority for further testing.

Due to Phase III drilling program, the B Deposit is now considered as a contiguous, low angle dipping mineralised horizon. The company believes it is possible that the B Deposit might link up with the Omega Deposit to the north. Further, the company geologist are of the view that the mineralisation can be extended incrementally during future drilling campaigns.

Phase III drilling program included Wildcat exploration target so that the company could do the follow up on historic test results which hold promise for the discovery of mineralities in the future. The first hole at this target was drilled to confirm the historic intercept followed by a small number of step-out drill holes.

It is worth noting that both the steps were successful in that the historic intercept was confirmed, and the step-out drilling indicates continuity of mineralisation over an area of 130m by 70 m. The drill holes intersected a thick zone of mineralisation commencing within 5m of the surface.

All three exploration drilling campaigns at Sorby hills have demonstrated that a step-change in the value unlocking of the project is reached through a careful and detailed review of the technical information and subsequent infill drilling.

Phase III results underpin the continuity of mineralisation in previously low-density drilling areas and are likely to increase Indicated Resources within the next Mineral Resource Estimate.

Currently, there are three more historic mineralisation lenses that require detailed assessment, re-interpretation and follow-up work programs. The technical team of the company is going to prepare for the next series of drilling campaigns to increase the mineral inventory.

Going into 2020, the company expects an optimised PFS/Ore Reserve, Strategic Financing and Offtake Update to arrive in Q1 2020.