More than 1,000MW of wind farm capacity, on three continents, developed by Windlab has reached financial close and is today either operating or under construction. It is developing more than 50 renewable energy projects, totalling over 7,500MW of potential capacity around the world.

On 17 June 2019, Windlab announced to have signed a deed of amendment for the extension as well as expansion of its corporate debt facility with the Clean Energy Finance Corporation (CEFC). The scope of facility has been raised and now stands at $ 10 million, up from its previous $ 3 million-limit. Simultaneously, the maturity date under the deed of amendment has been extended to June 2022 with progress repayments and annual limit reductions of $ 3 million on 30 June 2020 and 30 June 2021 each.

The larger facility would provide the company with the requisite funds to work on expanding its Australian portfolio, with a primary focus on the high-hub height turbine opportunities recognised for WindScape™.

In addition, Windlab also updated the market on the progress of its key projects-

On 20 March 2019, Windlab announced that all conditions precedent to the previously announced investment of USD 10 million into Windlab Africa Pty Ltd by Eurus Energy Holdings have been met, and the transaction has completed. 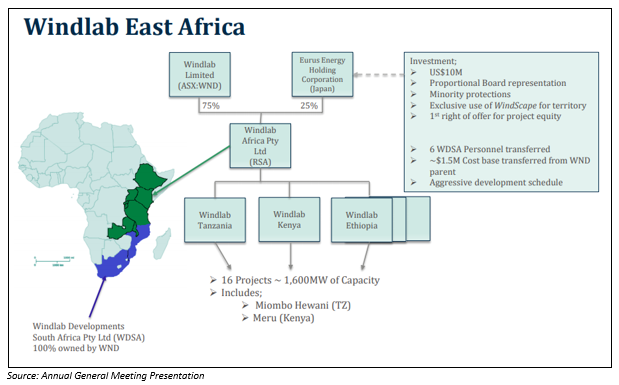 The agreement was signed in February 2019 whereby Eurus was to invest into South African registered subsidiary of the Company, Windlab Africa (WA), which holds the existing project development assets as well as the right to future projects in Tanzania, Kenya, Uganda, Rwanda, Zambia, Ethiopia, Malawi and Burundi. The deal was subject to certain conditions (now fulfilled) and Eurus has now acquired 25% of WA.

WA assets currently comprises 16 development projects totalling with a total potential capacity of around 1,650MW, including projects from at early-stage to the approved 300MW Miombo Hewani Wind Farm in Tanzania, which has been short-listed in a government sponsored off take process.

As for Eurus, along with its 25% stake, the company has also gained the right to proportional board representation in WA, customary minority protections and a first right to provide equity, on competitive terms for the construction of the projects in these regions. Windlab’s assets in South Africa and Mozambique are not part of the transaction.

The funding has been indicated to be utilised for the acceleration of development of key projects in East Africa to meet the large unmet demand for electricity.

According to the World Bank, Sub-Saharan Africa’s population now stands over 1 billion and has one of the world’s fastest GDP growth rates- 8.2% for Ethiopia, 5.5% for Kenya and 6.8% for Tanzania. However, the availability of electricity and generating capacity remain very low; for instance, Tanzania has a population of 59 million and yet only 1,600MW of generating capacity (Australia, NEM ~50,000MW).

On 15 March 2019, Windlab reported to have reached an agreement to provide asset management services for the 131.8 MWdc Nevertire Solar Farm, located in North-West NSW, via its wholly-owned subsidiary and a leading dedicated renewable energy asset manager, Windlab Asset Management Pty Ltd. WAM’s management role commenced with immediate effect from the date of the announcement.

The project reached financial close in May 2018 and is presently under construction by EPC contractor Biosar. It is expected to be completed by June 2019.

The company’s Assets under management stands over $ 1 billion. 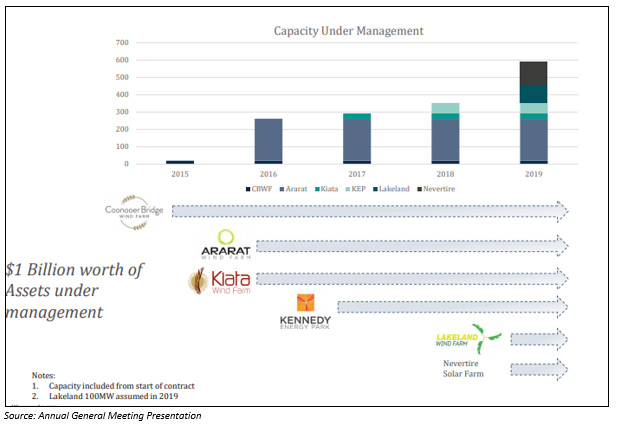 As per the financial result for the year ended 31 December 2018, the recurring revenue increased by 65% to $ 5.24 million. Besides, the total income and share of profits from associate and joint venture were $ 5.9 million. 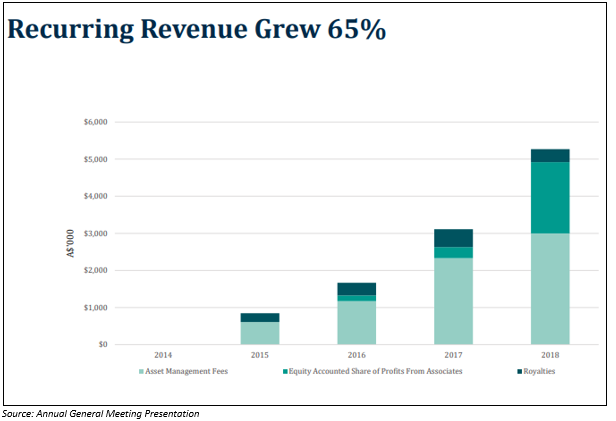 The Company made good progress towards achieving a number of strategic goals during the year.