On the discovery of Waitsia well, Norwest Energy NL joined the other Perth Basin explorers in the trend of re-evaluating the oil and gas prospectivity of its portfolio. This large, conventional oil prospect was reportedly delineated around 5 km to the west of exploration permit EP368 of the Perth Basin.

In a release dated 8 July 2019, Norwest informed that the Waitsia discovery has opened up an exciting new petroleum play within the basin by encountering a very significant hydrocarbon accumulation within the Lower Permian Kingia and High Cliff Sandstone formations. 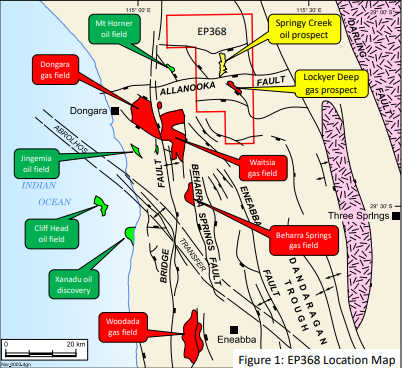 The exploration permit EP368 is the subject of a joint venture between Norwest Energy and Energy Resources Limited, a wholly owned subsidiary of Mineral Resources Limited. It holds Springy Creek oil prospect, which was until recently a structural lead, but has been upgraded to a drillable prospect following 2D seismic reprocessing undertaken by Norwest Energy. The recent seismic data reprocessing has enhanced the company’s estimate of Geological Chance of Success (GCoS) for the prospect to 25%.

As per the company’s information, the prospect offers significant potential for sizeable oil accumulations within both the Kingia and the High Cliff Sandstone formations which, based on well intersections in the wider region, are prognosed to incorporate thick, high-quality reservoir sand units at the prospect location at target depths of 2,470 metres and 2,570 metres respectively. It includes Prospective Recoverable Resources of up to 61 MMbbls (Gross), that makes 12.2 MMbbls for NWE’s 20% interest.

Carnarvon Petroleum recently announced that the historic discovery of oil and condensate rich gas in Dorado has been successfully appraised through the Dorado-2 well.

In the Caley reservoir, being the primary target, Carnarvon extracted high-quality oil while gaining confidence in the first phase of development on the foundation of excellent reservoir properties required for developing this oil field.

The report read that the wireline logging of the Dorado-2 has confirmed an expectation of significant oil and gas resource at Dorado. It further ensured a hydrocarbon column was encountered at Baxter reservoir with no gas-water contact identified.

On the basis of Dorado-1 and 2 reservoir results, the company believes that there is a sufficient potential in the deeper Crespin and Milne intervals to drill to the planned TD of approximately 5,100 metres MD.

The objective of the Roc South well was to determine if additional hydrocarbons existed that were capable of being tied-in and produced with the Dorado liquids (oil and condensate) and gas production facilities. However, the development plans for Dorado would not be affected by the results of Roc South in the Baxter and Caley reservoirs, as per the company’s report.

The report read that Arledge 16#2 has a planned total depth of 5,500ft and must be spud prior to July 17, 2019 to satisfy lease hold drilling commitments and thereby extend the Arledge lease (3,342 acres) by a further year.

The Lightning Prospect has a Gross Prospective Resource best estimate P50 of 1.95mmbo in the Cisco Sands. However, these estimates relate to undiscovered accumulations and require further exploration appraisal and developments to evaluate the existence of potentially moveable hydrocarbons quantities. 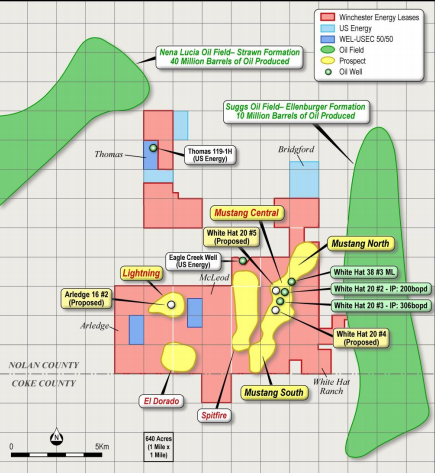 Location of Lightning Prospect and the Arledge 16#2 well

The company also announced the resignation of Non-Executive Director Peter Allchurch due to health reasons; resignation being effective 31 July 2019. Mr. Allchurch was the founding Chairman of Winchester and was instrumental in the identification and acquisition of the Company’s oil and gas assets in the USA.

Gas2Grid Limited has been granted extension of time to commence deepening Nuevo Malolos. In a market announcement to ASX, the company informed that the Philippine Department of Energy (DOE) has allowed it the time until the end of September 2019 to commence drilling operations on the Nuevo Malolos-1 Deepening.

As per the report, the company is recommencing preparations for the drilling operations in the coming weeks with the mobilization of the crew to promptly move the rig over Nuevo Malolos-1 from Malolos-1 that is about 20 metres away.

The closing date of 1 for 2 non-renounceable entitlement offer has also been extended from 28 June 2019 to 26 July 2019. The Offer Document had provided for the deepening of the Nuevo Malolos-1 to commence soon after the Offer Closing Date subject to raising at least $1,375,000 under the offer and/or by placement of any shortfall shares.

The market capitalisation of the company stands at $2.29 million with the shares outstanding of 1.14 billion in the market.