Superior Resources Limited (ASX: SPQ) conducts explorations for large lead-zinc-silver, copper, gold and nickel-cobalt deposits. It caters to northern Queensland. This region has potential to deliver great returns and maximise value growth for the SPQ’s shareholders. The company leads explorations within the Carpentaria Zinc Province, which is amongst the world’s richest mineral producing regions. The company has set its eyes on various Tier-1 equivalent exploration targets.

On 29th May 2019, the company announced that it had inked an earn-in and joint venture agreement with South32. The motive of this JV is to enhance and extend the explorations of SPQ’s 100% owned Nicholson Project.

SPQ would be the JV operator for Stages 1 and 2 of the joint venture operations. As per the Stage 1 of the “Hedleys Joint Venture”, South32 must fully fund an initial $2 million or drilling of 4,000 metres within the initial 12 months of the operations. However, the funding would begin right away.

For the Stage 2 proceedings, South32 may opt to fund an additional $4 million towards the exploration within the consequent four years to earn a 70% interest in the Nicholson project.

About the Nicholson Project:

The project is situated in north-west Queensland. Specifically, it is 250 km south-east of the MacArthur River Mine and 110 km north-north-west of the Century Mine. The project has almost 20% of the world’s zinc inventory.

It is an expanse of an under-explored geological basin. The area consists of sediments that are capable of hosting large lead-zinc-silver deposits, Mount Isa-style. This is very much like the McArthur River and Mount Isa deposits. In the past, the company has recognized a minimum of five such geophysical targets.

Recently, SPQ has affirmed the positive prospects of the area. It has identified the extensive presence of potential host sediments. Except one, all these targets have been explored and drilled previously. 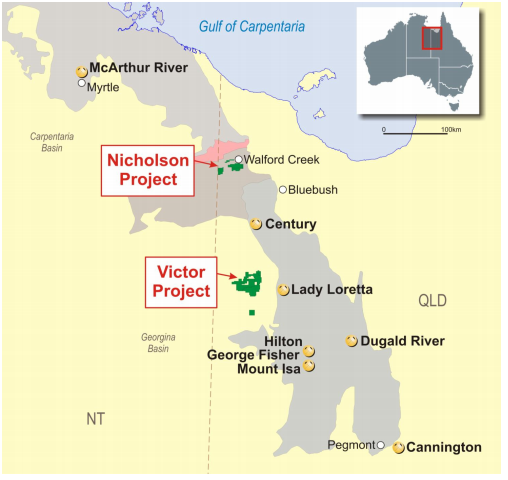 Regarding the joint venture, SPQ’s Managing Director, Peter Hwang stated that the JV was a notable milestone for the company’s lead-zinc strategy and in advancing the Nicholson project. It puts a stamp on the capability of the project to host a world class base metals deposit. The JV safeguards the company of being well and fully funded to complete of the substantial drilling program within the first year of the JV. He also stated that the company is well positioned as compared to other peer stocks listed on the ASX, with the company having exposure to entry-level Tier 1 lead-zinc-silver projects.

The drilling is expected to begin right after an aboriginal cultural heritage review is completed. This survey is planned to be conducted in early June 2019. 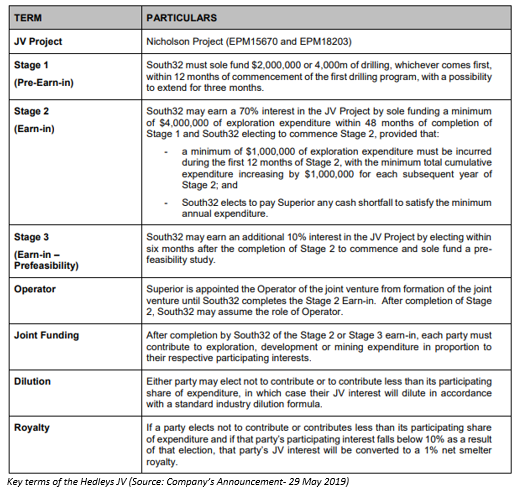